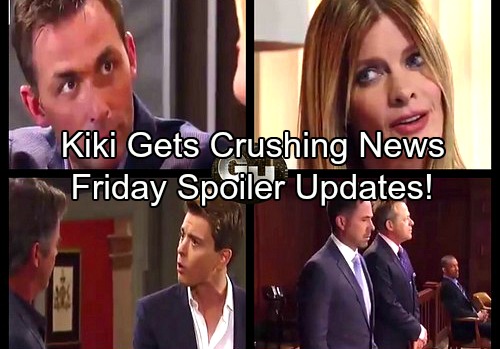 General Hospital (GH) spoilers for Friday, August 25, tease that Julian (William deVry) will await a decision on his fate. As Scott (Kin Shriner) stands beside him, Julian will hope for the best and prepare for the worst. Nearby, Griffin (Matt Cohen) will support Ava (Maura West) as she listens for Julian’s verdict.

Alexis (Nancy Lee Grahn) will also look anxious about the judge’s choice. This is a big moment for all of them. The judge will finally announce that the court finds the defendant guilty. This will be a difficult day for Julian, but he’ll try to stay strong. Thankfully, General Hospital spoilers state that Julian is headed back to the ABC soap this fall.

Meanwhile, Nina (Michelle Stafford) will urge Valentin (James Patrick Stuart) to be patient. He’s ready to find out if they can be a family again, but Nina wants to hold off on revealing her answer. She’ll remind him of her dinner invitation and insist that waiting is his only option.

Nevertheless, it’s easy to see that Nina’s softening toward Valentin. There’s a good chance she’ll make him the happiest man alive soon. Elsewhere, Dillon (Robert Palmer Watkins) will have mixed emotions. An amazing opportunity will fall into his lap, but it’ll mean he has to leave for Morocco tonight. Nina has a new assignment that will take Dillon far away from Kiki (Hayley Erin). 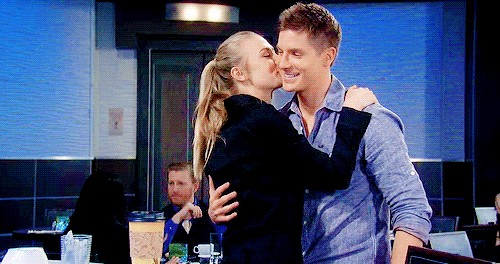 General Hospital spoilers say Dillon will want to talk all of this over with his love. They’ll discuss their relationship and how this lengthy project could affect it. Dillon and Kiki might decide they can make it work, but that plan won’t pan out. Since Robert Palmer Watkins was let go, Kiki will inevitably have to find herself a new love interest eventually.

Other GH spoilers say Lulu (Emme Rylan) will joke around with Dante (Dominic Zamprogna). She’ll don a baseball uniform and start swinging a bat around. Dante will wonder what Lulu is up to and she’ll gladly explain. Perhaps Lulu has some sort of surprise in mind for Rocco (O’Neill Monohan).

Across town, Michael (Chad Duell) will feel blindsided by Ned’s (Wally Kurth) move. Ned will make an offer that leaves Michael on edge. He’ll refuse to let Ned swoop and make changes at ELQ. Michael will contend that if Ned is plotting a takeover, he’d better be prepared for a fight.

Ned will provide reassurance as well as some clarification on his actions. They’ll shake on a deal, but will Michael ultimately regret it? GH fans could see some trouble next week. We’ll give you updates as other General Hospital news comes in. Stay tuned to the ABC soap and don’t forget to check CDL often for the latest General Hospital spoilers, updates and news.