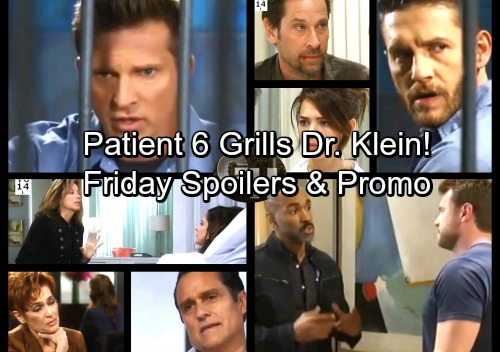 General Hospital (GH) spoilers for Friday, November 3, tease that Port Charles will continue to be divided over Patient Six (Steve Burton). Diane (Carolyn Hennesy) will finally have chance to weigh in on the Jason (Billy Miller) drama. Sonny (Maurice Benard) is 100-percent convinced this is the true Jason Morgan. He’ll urge Diane to trust him on this.

Diane won’t be sure they can take Patient Six’s word for it. She’ll wonder if this guy might be playing Sonny. General Hospital spoilers say Sonny just won’t believe that. He has to go with his instincts and those instincts say Burton’s Jason is the real one.

Meanwhile, current Jason will seek Curtis’ (Donnell Turner) assistance. He’ll provide updates on the situation and hope that Curtis can come through for him. Jason will want to prove that Patient Six is an impostor who’s up to no good. Curtis will vow to get to the bottom of it ASAP. Many PC residents are siding with Patient Six right now, but Curtis will promise that he’s got Jason’s back.

Elsewhere, Franco (Roger Howarth) will open up to Liz (Rebecca Herbst). He’ll confess that Jason had a twin and he knows what happened to him. Liz will be hurt that Franco kept secrets from her, but learning the truth will be the priority. Will Franco come clean about everything Andre (Anthony Montgomery) gave him? Let’s hope Franco won’t make this harder than it has to be!

Other General Hospital spoilers say Alexis (Nancy Lee Grahn) will visit Sam (Kelly Monaco). Once she hears the latest developments, Alexis will have some advice for her daughter. She’ll ask Sam to consider the possibility that Patient Six’s story is true. What if he’s actually Jason? Sam will admit that it’s an option, but she won’t know how she could even begin to handle that.

Alexis will also get big news from Scott (Kin Shriner) in Friday’s episode. He’ll fill her in on something that happened to Julian (William deVry) in prison. Alexis will soon take a trip to see Julian and their interaction will lead to some surprises. GH is setting up an exciting storyline, so stay tuned.

In the meantime, Griffin (Matt Cohen) and Ava (Maura West) will continue to flirt. They’re enjoying the whole dating thing and the fun that comes with it. Ava wants more than hot hookups, so Griffin will try to get to know her on a deeper level. Another date night should be a great start.

In lockup, classic Jason and Dr. Klein (Gene Farber) will clash. The doc will face intense pressure from his former patient. Burton’s character will do his best to pry some answers out of Dr. Klein, but he may run into some trouble. We’ll keep you posted as other GH details emerge. Stick with the ABC soap and don’t forget to check CDL often for the latest General Hospital spoilers, updates and news.