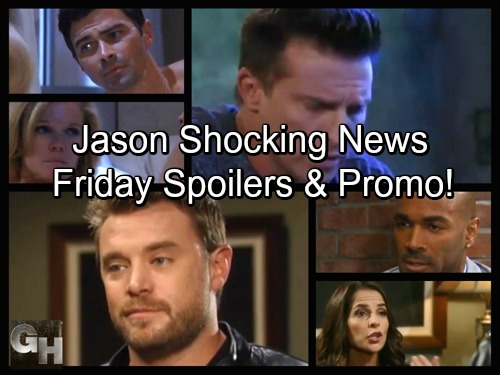 General Hospital (GH) spoilers for Friday, October 13, tease that we’ll see the aftermath of Griffin (Matt Cohen) and Ava’s (Maura West) steamy sex session. Whew! That escalated quickly. Now that everybody’s cooled off, it’s time to address some lingering issues. Griffin will look concerned when Ava suggests this was a mistake. She won’t want Griffin throwing away his vocation for her.

There’s a good chance Griffin won’t agree that he’s making an error. If he can’t fight his desires, the priesthood just isn’t for him anymore. Meanwhile, Anna (Finola Hughes) will come up with a new tactic. She’ll talk to Finn (Michael Easton) about her next Cassandra (Jessica Tuck) strategy, but he’ll just want all of this to be over. It’s been a lot for Finn to deal with, especially since he’s still struggling with loss.

Other General Hospital spoilers state that Nelle (Chloe Lanier) will grow frustrated. She’ll feel like every move she makes falls under suspicion. It appears Michael will explain his plan to clear Nelle, but she’ll be against the idea. Nelle will argue that she’s never going to be able to convince people that she’s innocent.

Of course, Nelle isn’t exactly giving Michael (Chad Duell) or anybody else a reason to trust her. He always has to find out her secrets from another source. Unfortunately, GH spoilers say Curtis (Donnell Turner) is about to drop an additional bomb. He’ll give Michael updates on his meeting with Sharon (Brea Bee) and a shocking fact will come out.

Curtis thought it was odd that Nelle grew up near the water, but supposedly wasn’t a strong swimmer. After a little more digging, Curtis will learn Nelle was actually quite skilled. His Internet search probably turned up some swim team awards or something along those lines.

Curtis will fill Michael in on his discovery and let him decide how he wants to interpret it. Michael will admit that Nelle thought this investigation was a waste of time. General Hospital spoilers say Curtis will offer another perspective. He’ll contend that maybe there’s something Nelle doesn’t want him to find out.

On the ship, Patient Six (Steve Burton) will reread Huxley’s (Trent Dawson) newspaper and all the info he has saved on his phone. He’ll insist that he’s trying to catch up on everything he missed. Back in Port Charles, Jason (Billy Miller) will stun Sam (Kelly Monaco) with some big news. He’ll explain that he intends to buy a media company.

In Nina’s (Michelle Stafford) office, Valentin (James Patrick Stuart) will reveal a similar plan. Will Jason and Valentin compete for ownership of the same corporation? Could they become unlikely partners instead? We’ll keep you posted as other GH details emerge. Stay tuned to the ABC soap and don’t forget to check CDL often for the latest General Hospital spoilers, updates and news.