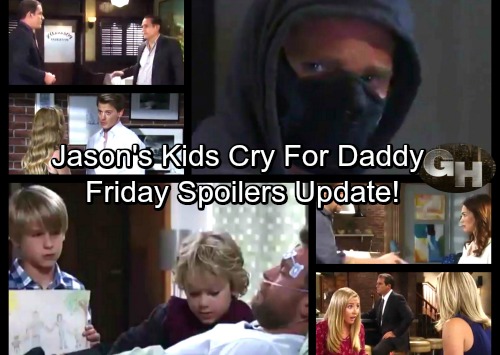 General Hospital (GH) spoilers update for Friday, September 22, tease that Carly (Laura Wright) will confront Josslyn (Eden McCoy) about her evening with Oscar (Garren Stitt). Joss will realize that Milo (Drew Cheetwood) blabbed about her lip lock. He already thought she was too young to date, so it seems Milo gave Carly the heads-up on Joss and Oscar’s close moments.

Sonny (Maurice Benard) will also get updates in Friday’s episode. Milo might urge Sonny to find out more about this secretive teen. Oscar is definitely hiding a few important facts about his life. General Hospital spoilers hint that some startling revelations will come out down the road.

For now, Nelle (Chloe Lanier) is in for a shock as well. When Michael (Chad Duell) mentions that he has some business to take care of, Nelle will ask for clarification. Michael might try to sidestep Nelle’s questions, but he’ll drop a bomb on her eventually. GH spoilers reveal that Michael’s bold request will shake things up.

Will Michael push Nelle to reconsider his idea of living together? She dismissed the suggestion before, but she might change her mind once Michael tweaks the plan. If he gets everything lined up, how can Nelle say no? Perhaps a shiny new apartment and a persuasive speech will do the trick.

Other General Hospital spoilers state that Patient Six (Steve Burton) will get some support. Ava (Maura West) will remind him that there are obviously people who care about him. Ava will feel like they’re all waiting on Patient Six to get better and come back to them. She just might stir up some motivation for the poor guy.

Meanwhile, Jake (Hudson West) and Danny (T.K. Weaver) will head over to Jason’s (Billy Miller) long-term care facility. The boys will seem nervous and distraught as they stay by Jason’s bedside. Danny will beg his dad to wake up, so Sam (Kelly Monaco) should be a mess. Thankfully, Kristina (Lexi Ainsworth) and Alexis (Nancy Lee Grahn) will be there to help Sam through this difficult ordeal.

Other General Hospital spoilers say Liz (Rebecca Herbst) will get some surprising news. Franco (Roger Howarth) will let her look at his old photograph on Friday. He’ll confess that his imaginary friend wasn’t so imaginary after all. Franco will fill Liz in on the real reason he invited Betsy (Deborah Strang) to opening of his art exhibit. He’ll express his desire to solve this wild mystery.

Liz will offer her thoughts on Franco’s theory and insist that he should just be honest next time. She’ll want Franco to remember that they’re a team. Can this couple keep their bond going strong? We’ll keep you posted as other GH details emerge. Stay tuned to the ABC soap and don’t forget to check CDL often for the latest General Hospital spoilers, updates and news.