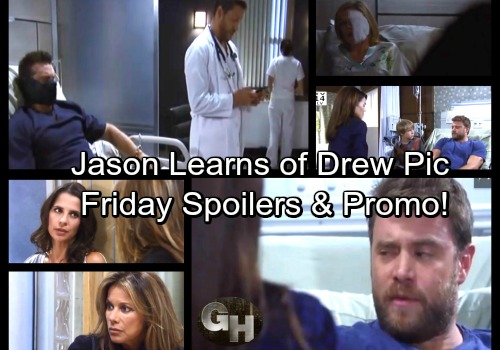 General Hospital (GH) spoilers for Friday, September 29, tease that Jason (Billy Miller) will get some puzzling news. Jake (Hudson West) will stop by the long-term care facility to see his dad. He’ll talk about the photo project he’s been working on as well as the discovery it led to.

Jason will be confused when Jake mentions the pic Franco (Roger Howarth) showed him. He’ll wonder why they were supposedly in a photo together. Jake may suggest it was just a kid who looked like Jason, but he doesn’t know the whole story. Franco has learned plenty of info about Jason and his twin brother, Drew.

Liz (Rebecca Herbst) will be nearby when Jake fills Jason in, so she’ll probably downplay the significance. Franco convinced her it was just a neighborhood boy. He doesn’t want to stir up any more trouble, so he’s choosing to let this go.

GH spoilers say Franco will be ready for a new beginning on Friday. However, it’s doubtful he’ll get one just yet. Secrets are destined to change everything on the ABC soap. Meanwhile, Sam (Kelly Monaco) and Alexis (Nancy Lee Grahn) will clash. They’ll once again find themselves at odds over Julian (William deVry).

When Sam senses that Alexis is still holding a torch for her ex, she’ll give her mother an eyeroll. Sam will think it’s time to let the past go. Elsewhere, Dillon (Robert Palmer Watkins) and Kiki (Haley Erin) will also face tension. It looks like he’ll make snide comments about all the work she’s doing with Dr. Bensch (James DePaiva).

General Hospital spoilers say Kiki will wonder what’s up with her beau. She’ll ask if Dillon might be jealous. Dillon may try to deny it, but it’s obvious that he feels distant from Kiki. “Killon” could be headed for a split if this keeps up.

Across town, Kristina (Lexi Ainsworth) will decide to track down Parker (Ashley Jones). She’ll have some updates to pass along. Perhaps Kristina will share that Jason is doing much better. Parker was concerned for Kristina and her family the last time they talked.

Of course, this is really just as another excuse to talk to Parker. Kristina may find a way to reignite this romance sooner or later. At GH, Franco will grill Griffin (Matt Cohen) about Ava (Maura West). The fearful doc will admit that Ava might be in trouble.

In St. Petersburg, Patient Six’s (Steve Burton) doctors will continue to view him as a real pain in the neck. Burton’s character will struggle with his restraints as he plots his escape. In her room, General Hospital spoilers say Ava will have a vivid dream about Griffin. It’s clear that she’s still longing for her handsome friend.

Griffin will head off on a heroic mission, so maybe there’s hope for Ava’s love life. We’ll keep you posted as other details emerge. Stay tuned to ABC’s GH and don’t forget to check CDL often for the latest General Hospital spoilers, updates and news.