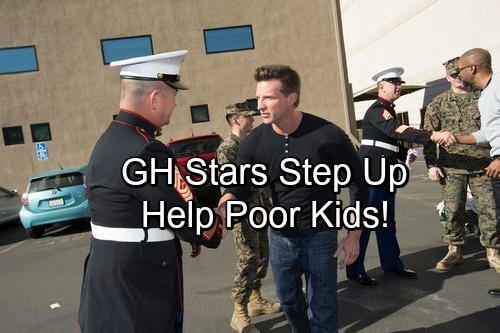 General Hospital (GH) spoilers reveal that several of our favorite GH actors got together with Feeding America and Toys for Tots on a project called “Share the Joy” this holiday season. Executive Producer, Frank Valentini joined several members of the US military, and GH stars including Dominic Zamprogna (Dante Falconeri), Nancy Lee Grahn (Alexis Davis) and William deVry (Julian Jerome)

General Hospital fans will be thrilled to see several photos were posted on social media, with the stars shaking the hands of our Country’s heroes. There are many pictures posted on Facebook as well as General Hospital’s Twitter account, as they toured around the GH set. 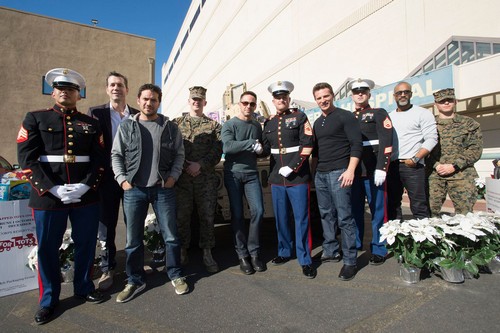 Fans of GH might remember back in December 2015, when General Hospital first participated in the Disney and ABC Network’s collaboration of “Share the Joy” campaign with Toy for Tots. If you remember, GH nurse Elizabeth Webber (Rebecca Herbst), a mother of three young boys, donated toys at the hospital on screen, but what you might not know, is that the cast and crew collected toys behind the scenes and presented them to the US Marines later that month.

General Hospital spoilers remind you also that Spencer Cassadine (Nicolas Bechtel), was also in a charitable mood, taking every last penny he had in his possession and donated it to buy the less fortunate toys that year. It seems that Toys for Tots is quickly becoming a time honored tradition among General Hospital and its ABC home, much like the Nurse’s Ball, that is fondly cherished by many.

Be sure to tune into ABC’s General Hospital (GH) often to catch up on all the exciting stories that are unfolding right now. Check CDL General Hospital spoilers often for updates, news, rumors and spoilers!