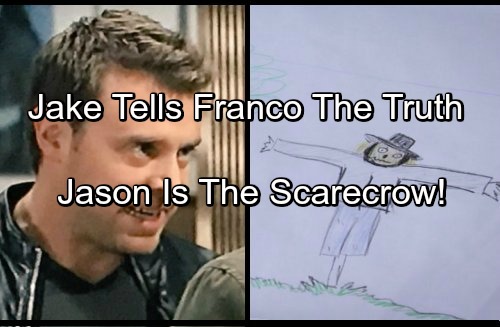 General Hospital (GH) spoilers reveal that Jake Webber (Hudson West) will confirm to Franco (Roger Howarth) that his dad Jason Morgan (Billy Miller) is the terrifying scarecrow from his image. This changes the dynamic that’s going on right now between JaSam and Friz so they can all work together.

The Jake backstory will reach its peak during May sweeps and it’s not just Jake’s backstory that has been crafted by the GH writers but also Jason’s. The writers are adding timelines to the story that don’t align with General Hospital history, but that’s a pretty common occurrence for the Jelly writing team these days.

Jake tells Franco that he’s the little boy hiding behind the tree and Jason is the scarecrow that protected Helena Cassadine (Constance Towers) from her enemies and was friends with her. It also comes out soon that Jake saw Jason killing people on Helena’s behalf and the kid is in terror of Jason’s former dark side. 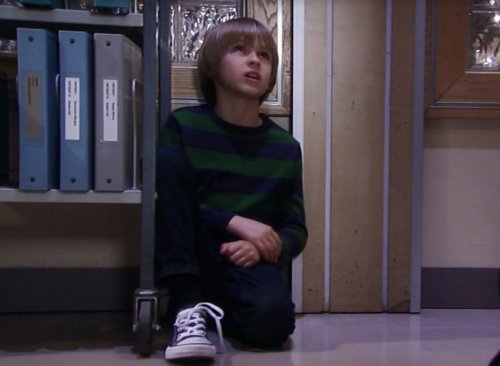 Jason has continued to pile hate and blame on Franco over the Jake situation because Sam Morgan (Kelly Monaco) has such a dim view on Franco which is totally understandable. Franco is a changed man but that doesn’t erase the sins of his past but it’s clear Franco is very important to Jake’s mental health.

Franco found Jake hiding at the hospital and General Hospital spoilers say the two will talk things out. Jake feels like Franco betrayed his trust by showing the drawing to Liz Webber (Rebecca Herbst) and the last thing Franco wants is for Jake to stop communicating about his troubles. After Franco assures Jake he’s on his side, the kid talks.

General Hospital spoilers for this week indicate Jake confirms for Franco that Jason is the scarecrow and he’s scared of Jason when he’s like that. Jake seems to know Jason has changed and isn’t the creature he was when Helena had control of him, but the kid is scared that Stone Cold side could come out again. 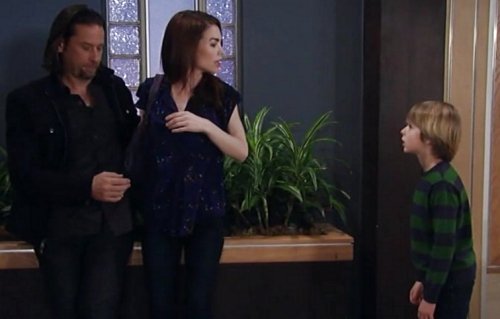 Franco has to loop Liz into this situation and then Liz has to bring the bad news to Jason. Other General Hospital spoilers reveal Jason doesn’t like what he hears and he might try and blame Franco but then reality sets in. By the end of the week, Liz and Jason are on common ground and are a united front for their son.

As we head into next week, (April 24-28) Jason tries to deal with this stunning revelation about his missing years and he wonders what else he might have forgotten. GH spoilers warn that Jason is haunted by events he can’t remember and hates that Jake is scared of him. Seeing the drawing of Jake cowering from him hits Jason hard.

In the end, this will pull JaSam and Friz into an agreement and even though Andre Maddox (Anthony Montgomery) made progress with Jake, it becomes clear to all that Franco is the person Jake is willing to open up to and so he needs to be allowed to stay in Jake’s life. Jason relents on pushing Franco away. 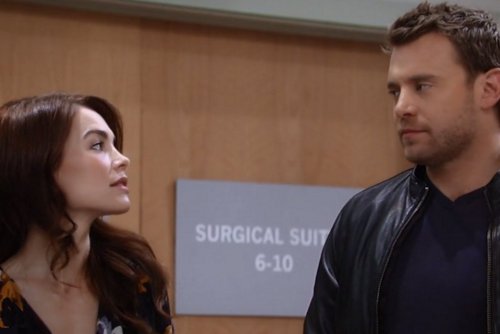 This all builds up to a stunning conclusion during May sweeps where we found out what the General Hospital writers have done in tampering with Jason’s history to create a time where he was the terror of Cassadine island. Share your comments below on this coming revelation about Jason and Jake and tune into CDL often for the latest General Hospital spoilers, news and updates.