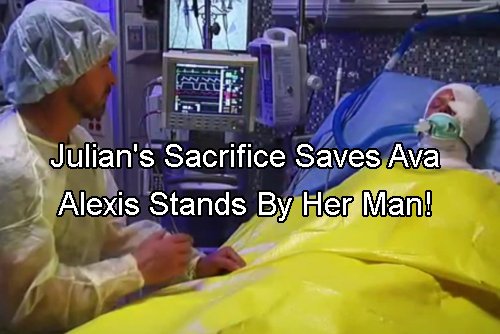 General Hospital (GH) spoilers reveal that Ava Jerome (Maura West) needs life-saving skin grafts to heal from her injuries. Dr. Griffin Munro (Matt Cohen) mentioned them to Ava on Monday’s GH episode right before he prayed with her, stepping out of the role of doctor and into the role of priest and confessor. Ava prayed along with Griffin even though she could barely move her burned lips.

It was sweet as Griffin gently held her right hand that was still burned but not so badly as her left side which is mostly a wreck. Ava is so bad off, she begged Sonny Corinthos (Maurice Benard) to kill her. But Sonny is so keen on revenge that he doesn’t just want her to die, otherwise he would have finished her off right then. Instead Sonny wants her to suffer those burns, then kill her when she’s healed.

But General Hospital spoilers say there’s hope for Ava. Griffin promised an experimental type treatment so we know this will be some soap opera medical miracle that doesn’t quite exist in the real world. We all know that eventually, Ava will be back to the gorgeous babe she was before without a scar to her name. But how she gets there will be a long and painful story and Maura West is doing her usual brilliant job. 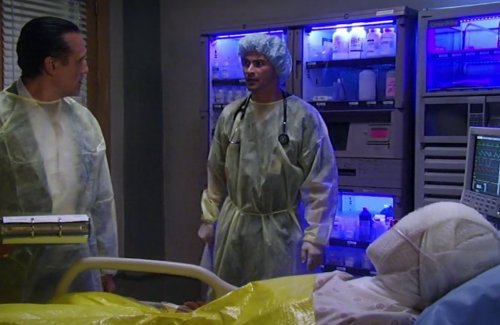 Griffin said he’s contacting a plastic surgeon and they will need donor skin. If it comes down to a family match, Ava’s only got one option. Her big sister Olivia “Liv” Jerome (Tonja Walker) is in Darkham Asylum and her dad Victor Jerome is dead. Her mom might be a viable option, but General Hospital spoilers tease it’ll be her big brother Julian Jerome (William deVry) that comes to her rescue.

Julian knows he’s been living a rotten life and has made some bad choices and he wants to atone for the sins of his past. That’s why he’s not coming after Sonny for Ava’s injuries and told Alexis Davis (Nancy Lee Grahn) that he wouldn’t trigger a mob war over this incident. But Julian will do more than that. Rather than give Ava the shirt off his back, GH spoilers hint he might give her the skin off it.

With Julian and Ava being siblings, there could be a better chance of the skin not being rejected if it’s from a close family match. In many burn cases, they use skin from the patient but since half of Ava’s body is burned, they can’t take the other half to graft and heal her. That means skin must come from somewhere. 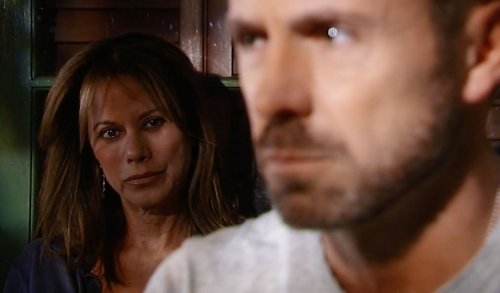 In most cases, skin from living tissue donors comes from skin removal surgery such as after drastic weight loss, but General Hospital never lets real science get in the way of their plots. Just as hearts and kidneys have been donated on GH, this time it will be skin from Julian to Ava. Alexis will stand by Julian as he goes through the donation ordeal and this will anger her family.

Sam Morgan (Kelly Monaco) wants Julian gone from their lives and won’t care that he’s making a sacrifice to save his sister. Sam hates the Jeromes and has no sympathy. This might be the start of a new spark for Julexis, but will bring drama. Share your comments below and tune into CDL often for the latest General Hospital spoilers and news.