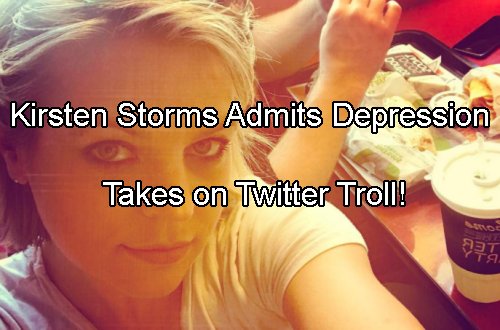 General Hospital (GH) spoilers reveal that Kirsten Storms had an unpleasant encounter with a troll on Twitter but her response was positive and empowering and shows that she’s on the right track. A soap site posted a link to an article about Storms’ absence from General Hospital and possible return and a troll piled on and alleged that her absence was due to drug use. Storms’ reply was both revealing and brave.

Kirsten Storms tweeted back at the naysayer saying, “I actually suffer from severe depression. But kudos to you for being cool enough to tag me in that.” Storms hashtagged her reply “keep trollin.” There have been a lot of questions about why Storms took her fourth break from General Hospital and speculation has run rife particularly given her weight loss, skin and hair issues before her departure.

Over her three month break from GH, Kirsten Storms was mostly on radio silence on social media but picked back up recently and has shared tweets and Instagram photos of her with friends and out with daughter Harper Rose Barash. One of her recent IG pics was of her with a friend at Taco Bell enjoying fast food. In all her recent photos, Storms looks good and as if she’s put on some healthy weight.

It’s not clear if Kirsten Storms took a mental health break from General Hospital or if it was physical health issues that took a toll, but she’s clearly on the road to recovery. Fans of the canceled Dirty Soap series might recall that Storms mentioned that she has been working since she was a child and her acting gigs supported the entire family. That’s enough to cause stress and is an unfair weight for a child to bear. 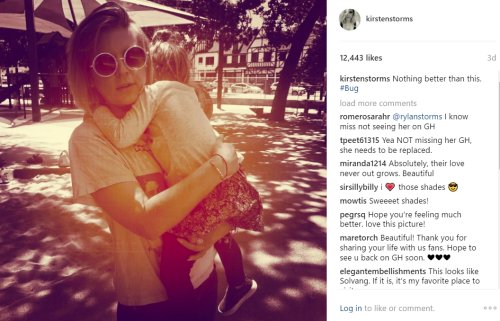 As a result, while on Dirty Soap, Kirsten Storms shared that she was only in contact with her beloved brother Austin Storms and is estranged from the rest of the family, including her parents who pushed her into the role of breadwinner at such a young age. Storms went to work at age five acting in commercials and landed her first soap role at the age of 15 playing Belle Black on Days of Our Lives.

At age 33, Kirsten has been acting for more than 28 years which is a long career for one so young. Unfortunately, depression and other issues seem common among actors that went to work at such a tender age and many suffer lifelong struggles, likely because they never had the chance at a “normal” childhood. When Storms spoke about pressure from her family on Dirty Soap, she was distraught. 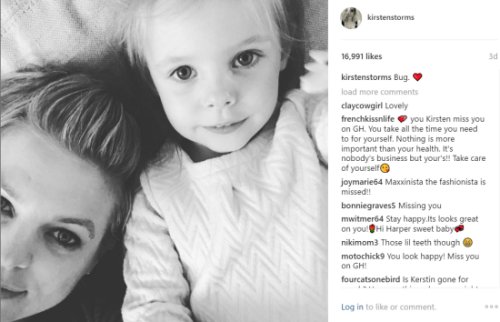 Whether it was depression or another issue that took Kirsten Storms away from General Hospital this time, it seems like she’s confronting her issues head on and took the time away from work to address the issue because she looks drastically healthier in recent photos. But when will Maxie Jones be back in Port Charles?

Some General Hospital spoilers hint Maxie might put in a surprise visit at the Nurses Ball since her on-screen husband Nathan West (Ryan Paevey) is struggling with loneliness and Nurse Amy (Rise Dorken) has her eyes on the handsome cop. We’ll see if Maxie’s back next week. Share your comments below on Kristen Storms dealing with the internet troll and tune into CDL often for the latest General Hospital spoilers and news.