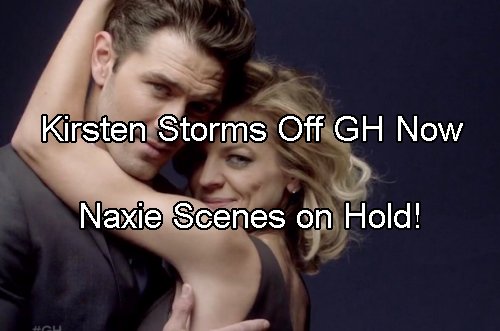 DC quotes their source saying, “Kirsten is still very much a part of the GH cast. She’s just taking some time off.” This is interesting because Ryan Paevey, who plays Nathan West, was taking a brief hiatus from the show to shoot a movie, is back on set and working as of a week ago.

Ryan Paevey shared on his Instagram a photo of himself with Brooklyn Rae Silzer and said, “Lookit! I haven’t been back to the studio in ages, and came back to find these and all the feels” talking about a hug he got from the tiny actress that plays Emma Drake. What does this indicate? 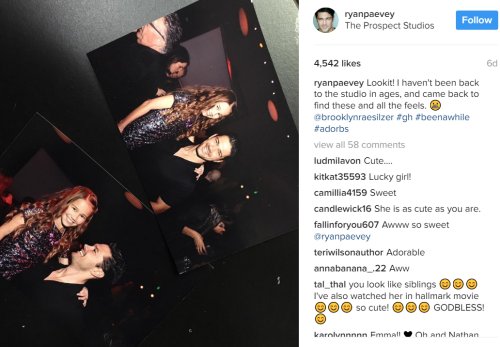 Was Kirsten Storm’s break architected weeks ago? Perhaps that’s why they set the scene for Nina Cassadine (Michelle Stafford) to fire Maxie from Crimson. The storyline worked naturally since Maxie would certainly meddle in Nina’s life to help Lulu Spencer (Emme Rylan) see her daughter.

But now, Crimson is falling apart and there is no one there to help Nina. Maxie’s character is needed but it seems she won’t be around. How will they explain the absence of one-half of the newlywed couple? None of the upcoming spoilers that carry us to the end of March have any Naxie scenes.

It’s fine for the couple to be off screen together – they can write it off as a honeymoon – but what about when Nathan comes back alone? There’s no word if this is more with Kirsten Storms’ skin issues or if it’s for health reasons, since that definitely falls under the category of “personal.” 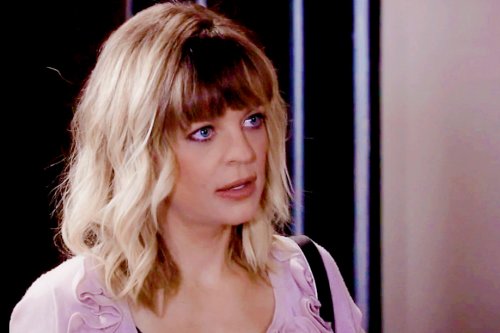 We all saw she was dealing with a hair crisis as some insiders had reported Kirsten was letting her natural brunette color grow in to allow her hair to get back to healthy since it’s been bleached blonde for years. There is no word either on how long Kirsten’s break from the show will be.

With tons of Naxie fans hoping to see their favorite couple together, this is sad news that there won’t be any scenes for this couple for quite a while. There is also no word on whether GH is considering a recast again if some scenes need to be acted by the couple.

Perhaps Molly Burnett will be brought back. Her IMDB page doesn’t show any current projects and her Twitter and Instagram timelines show just modeling jobs so if Kirsten Storms’ break from the show runs long, it looks like Molly might have time to come back and reprise her recast as Maxie.

Kirsten has been radio silent on Twitter for almost a month and for more than a month, she hasn’t shared on Instagram. Her ex-Brandon Barash is active on social media, as usual, showing lots of pics with him and daughter Harper Rose.

But it’s been eight weeks since Brandon had a pic of ex-wife Kirsten Storms on his IG timeline and his posts and pics make it look like he’s with their daughter full time. What do you think GH fans? Why is Kirsten Storms taking her second break from General Hospital in less than a year?

Are you concerned? Share your comments below and tune into CDL often for the latest General Hospital spoilers, news and updates.