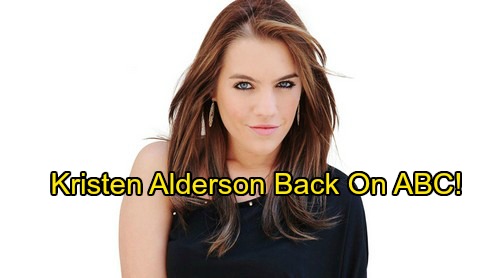 General Hospital (GH) spoilers tease that Kristen Alderson (ex-Kiki Jerome) is headed back to ABC’s block of daytime programming. Since there have been so many return announcements lately, GH viewers were hoping Alderson might pop in Port Charles. After all, Tamara Braun (ex-Carly) is returning in the brand-new role of Dr. Kim Nero later this week.

Unfortunately, it looks like Alderson isn’t planning a General Hospital comeback at the moment. On the bright side, you can catch her on The Chew soon. If you’ve been missing Alderson on your screen in the afternoon, here’s your chance to see her.

Alderson recently posted a photo on Instagram along with a caption about how much fun she had on set. “Had a blast visiting so many of the One Life to Live crew members (aka my second family) that now work at The Chew! Everyone there could not have been more sweet and welcoming,” Alderson said. She added that fans could catch her on Wednesday’s episode, so be sure to tune in! 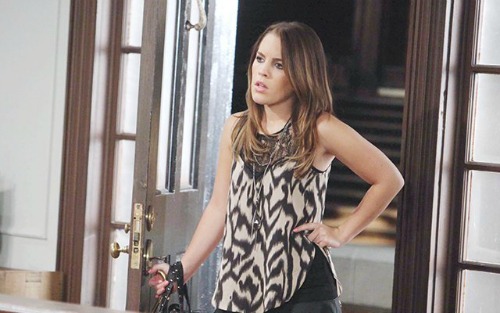 As for the future, you never know when GH might lure Alderson back. There’ll be plenty of twin drama to keep us entertained in the meantime. General Hospital spoilers hint that you should be on the lookout for familiar faces as well as a few new ones. Jason (Billy Miller) and Patient Six’s (Steve Burton) storyline will bring some interesting characters to town.

Will you watch Kristen Alderson’s appearance on The Chew? Do you hope she’ll return to Port Charles one day? We’ll give you updates as other General Hospital news comes in. Stick with ABC’s GH and don’t forget to check CDL often for the latest General Hospital spoilers, updates and news.

Had a blast visiting so many of the One Life to Live crew members (aka my second family) that now work at @TheChew !😍 Everyone there could not have been more sweet and welcoming! Tune in next Wednesday & you might catch a glimpse of me😜