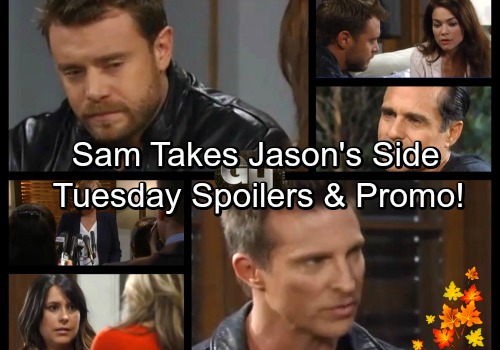 General Hospital (GH) spoilers for Tuesday, November 21, tease that Sam (Kelly Monaco) and Alexis (Nancy Lee Grahn) will have a chat about Jason (Billy Miller). They’ll rehash the twin situation and try to figure out what the future’s going to look like. Alexis may wonder how Jason intends to handle any looming legal threats.

Sam will insist that Jason’s determined to make something lasting for their family. She’ll promise that Jason will fight for what he believes is rightfully his. Across town, Jason and Liz (Rebecca Herbst) will discuss the twin drama as well. Liz will feel like everyone’s doubts will be put to rest pretty soon. She’ll suggest that the answers are on their way.

It sounds like they’re counting on Jordan (Vinessa Antoine) to find Jason’s fingerprints on file somewhere, but we all know it won’t be that simple. General Hospital spoilers say plenty of twists and turns are ahead in this storyline. As other evidence emerges, it’ll lead to even more questions.

Elsewhere, Ava (Maura West) will continue her search for the perfect doctor. She needs someone skilled who’s also willing to perform an unethical procedure. Ava may spar with Griffin (Matt Cohen) again, but he’ll assure her that he’s not going anywhere. Griffin has truly fallen for Ava, so it’s going to take more than a couple of arguments to push him away.

Meanwhile, Nora Buchanan (Hillary B. Smith) will make a public statement as Liv’s (Tonja Walker) attorney. Valentin (James Patrick Stuart) warned Nora that she’d better get her client to cooperate, so GH fans will be anxious to see if she pulled it off. However, a real shocker is brewing next week. Alexis’ plan to exonerate Julian (William DeVry) will definitely be in jeopardy.

Other General Hospital spoilers say Carly (Laura Wright) and Robin (Kimberly McCullough) will struggle with some guilt. They’ll beat themselves up for believing Jake Doe was actually Jason Morgan. Carly will declare that they made a terrible mistake. Robin will agree, but all they can do is move forward. They’ll both want to prove Burton’s Jason is the real deal, but that’s not going to be easy.

For now, Patient Six will just try to enjoy Thanksgiving with his loved ones. He’ll smile as he tells Sonny (Maurice Benard) that he’s happy to be home. General Hospital spoilers state that Patient Six will get a few moments of peace, but it won’t be long until another round of drama hits.

Back with current Jason, he’ll receive some comfort from an enemy. Will Franco provide a surprising shoulder to lean on? We’ll give you updates as other GH news comes in. Stick with the ABC soap and don’t forget to check CDL often for the latest General Hospital spoilers, updates and news.