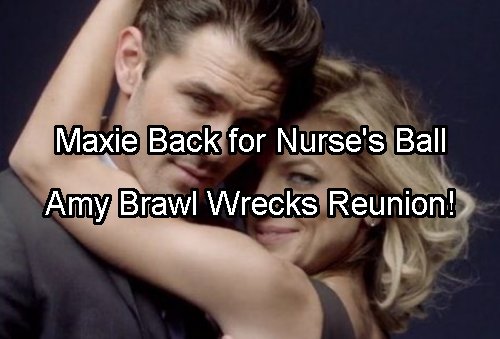 General Hospital (GH) spoilers for next week’s new GH episodes, May 22 to May 26, reveal lots of action at the Nurse’s Ball and one surprising return will bring a major confrontation. Maxie Jones (Kirsten Storms) is set to show up at the Ball to surprise her lonely hubby Nathan West (Ryan Paevey) but this isn’t the joyful reunion Naxie fans are hoping for because of complications thanks to sassy nurse Amy Driscoll (Risa Dorken).

Nina Clay Cassadine (Michelle Stafford) tried to lure Maxie back to Port Charles with the promise of a rehire job at Crimson magazine, but Maxie shockingly turned it down. Nina is drowning at work and also hates to see Nathan so down in the dumps about being apart from Maxie, so that’s why she made the generous offer, but was Maxie just teasing Nathan and was planning to return soon?

General Hospital casting news has leaked that Damian Spinelli (Bradford Anderson) is back in Port Charles soon so it’s likely he is bringing Maxie home along with little Georgie Spinelli for a visit. Nathan has been pining for Maxie and recently earned the attention of Nurse Amy when she stopped by his apartment to find out why Maxie wasn’t showing up for her volunteer shift at the Nurse’s Ball rehearsals. 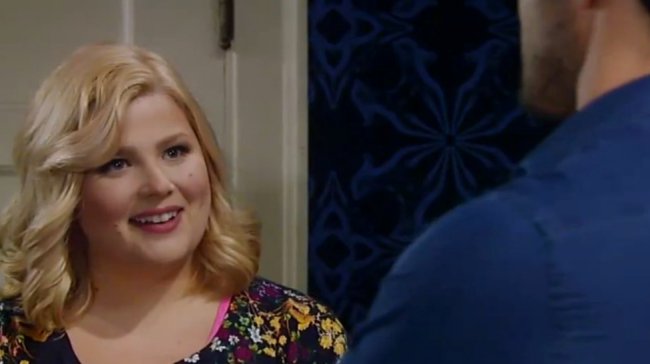 That led Amy to reveal that Maxie had bullied her in high school and blocked her from being a cheerleader since Maxie was head cheerleader and was body shaming Amy to keep her off the squad. Nathan tried to be positive about it, but General Hospital spoilers say it seems clear that Amy feels that Maxie did her wrong back in the day and she’s still upset about it – and who can blame her if it’s true that it went down that way.

Amy seems to have her eye on Nathan and even stole a pic of Naxie from the apartment and tore Maxie out of it. General Hospital spoilers leak that with Maxie conveniently out of town and Nathan volunteering to take Maxie’s place at the rehearsals for the Nurse’s Ball, that leaves Amy time to flirt and hang out with Nathan and work up a really big crush on Maxie’s husband. That’s not a good idea and can only lead to hurt.

Amy will be pleased that Maxie is still gone when the big night rolls around next week and will be thrilled to hang out with Nathan and pretend like she’s his date. General Hospital tease that unfortunately for Amy, Maxie shows up at the ball looking gorgeous and Nathan swoons. But that’s when things take an unexpected turn. When Maxie sees her old high school bully target making eyes at her hunky husband, Maxie lashes out. 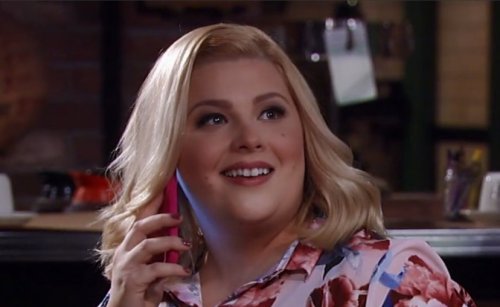 Maxie is happy to see Nathan and definitely doesn’t want another woman making eyes at him. When Maxie is unkind to Amy, Nathan won’t like it because it proves true what Amy said about Maxie being a high school bully. This is a side of Maxie that Nathan won’t like and could ruin the Naxie homecoming. Will Nathan and Maxie survive this hiccup after her long absence? Share your comments below on the upcoming Naxie reunion and Amy’s pivotal role that triggers Maxie’s jealousy. Tune into CDL often for the latest General Hospital spoilers and news.