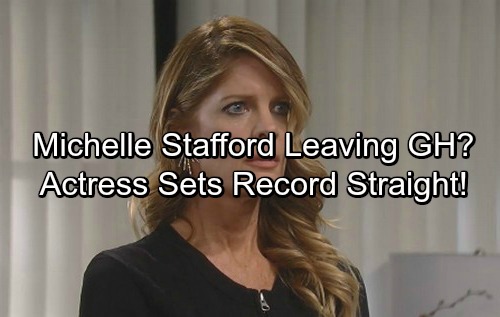 General Hospital (GH) spoilers teased that Michelle Stafford hinted she could be out as Nina Reeves. Apparently, the daytime actress posted a cryptic message on her social media account, and it sent the fans into panic mode as they assumed that it meant that she lost her contract with GH. At a time like this when General Hospital has fired several fan favorites, without warning or apparent reason, loyal GH fans are naturally fearful more actors could be dropped.

Stafford wrote,” Eventually the ride comes to a stop. You either ask to go again; sometimes they let you. Or you hop on another ride… It’s always up to you.”

It sounded as if she was saying that she had been let go from General Hospital. Thankfully, it was all a misunderstanding.

Michelle added, “My last text had nothing to do with GH. I have many other aspects to my life. It was just something I was feeling. Thought I would share.”

General Hospital spoilers indicate that Stafford isn’t planning on leaving the role of Nina Reeves for a long time, if ever. She had said last year that she would stick around for as long as TPTB would keep her. 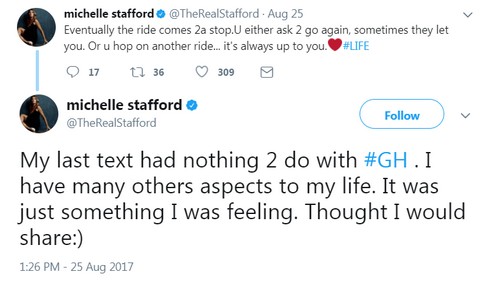 Michelle Stafford joined GH in 2014 as Nina Reeves, Dr. Silas Clay’s (Michael Easton) mentally unbalanced and formerly comatose wife. It took her a while to get over Silas, but she has moved on and has several (semi) successful relationships. Over the past three years, Nina got her life together and now is the editor of a fashion magazine.

Before her General Hospital days, Stafford played Phyllis Summers for almost 17 years. The daytime actress decided to leave the Young and the Restless after feeling as if she could no longer add any more to the role. Gina Tognoni replaced Stafford, who has made the role of Phyllis her own. As for Stafford, she feels at peace with her decision to leave Y&R for GH.

In addition to her role on soap operas, Michelle launched a successful skin care line made with natural and organic products called Skin Nation. She sold out within a few days of launching the product. Stafford created a web-series, based on her own life called, The Stafford Project.

General Hospital fans can rest assured that Michelle Stafford is sticking around and her social media post had nothing to do with her contract with GH. Stick with CDL for more General Hospital spoilers, news, and casting updates!

My last text had nothing 2 do with #GH . I have many others aspects to my life. It was just something I was feeling. Thought I would share:)