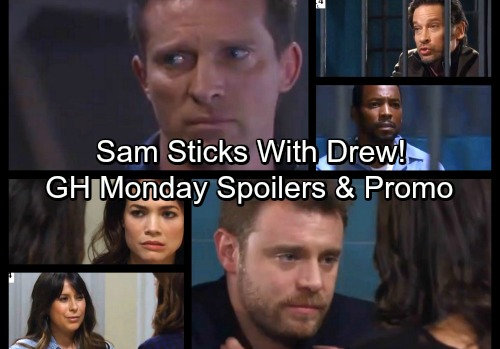 General Hospital (GH) spoilers for Monday, December 4, tease that Andre (Anthony Montgomery) will find himself in lockup. Franco (Roger Howarth) will mosey in and suggest that he needs a session in the worst way. Andre won’t be in the mood to deal with Franco’s issues and weird sense of humor. He’s facing serious charges, so he’s got big problems of his own.

Nevertheless, Franco’s got a captive audience. He might as well spill his concerns, which probably involve the evidence Andre gave him. Franco will be glad Andre didn’t rat him out for keeping this secret. However, he may want reassurance that his knowledge of the twins’ identities will remain under wraps.

Franco will worry that Liz (Rebecca Herbst) will find out what he knew. He’ll wrestle with guilt about lying to her, but he may decide it doesn’t matter now. Of course, it most certainly would matter to Liz! She hates when Franco deceives her, especially when it’s something important. This news affected Jake (Hudson West), so that makes Franco’s actions even worse.

Elsewhere, Robin (Kimberly McCullough) will ask Liz for a favor. She joined Patient Six’s team soon after she saw him, so she won’t be surprised when she learns he’s the real Jason. Liz will announce her intentions, but Robin will ask her not to follow through on them. Perhaps this involves Liz’s plan to keep Jake away from Jason for a while. She doesn’t want to rush this and make things tougher on her son.

Robin will understand that Drew has been very involved in Jake’s life, so she’ll respect their bond. She’ll probably just want to make sure both twins’ feelings are considered. Meanwhile, Sam (Kelly Monaco) will vow to stand by Drew. General Hospital spoilers say he’ll obviously be feeling distraught, but Sam will promise they’re going to get through this together.

Across town, Alexis (Nancy Lee Grahn) will reach out to Jason. She’ll realize that the situation is tricky, but she’ll make a heartfelt plea anyway. Alexis will note that Sam and Drew have a solid relationship. She’ll contend that her daughter’s finally in a good place and Jason shouldn’t make her give that up.

General Hospital spoilers state that Jason will be on the same page. He intends to respect Sam’s wishes and back off. Jason didn’t return to Port Charles with the goal of stirring up trouble. GH fans can’t forget that he’s a victim, too.

Oscar (Garren Stitt) and Josslyn (Eden McCoy) will also spend some time discussing the daddy drama. Josslyn took Drew’s glass and now a DNA test is in the works. She’ll note that this time tomorrow, Oscar will have the answer he’s seeking.

Finally, Nelle (Chloe Lanier) will score some points with Michael (Chad Duell). Her Christmas present for Josslyn will leave Michael feeling torn about their breakup. Too bad Nelle’s recent scheme will destroy all the progress!

GH viewers should tune in for Nelle and Michael’s showdown later this week. We’ll give you updates as other GH details emerge. Stick with the ABC soap and don’t forget to check CDL often for the latest General Hospital spoilers, updates and news.