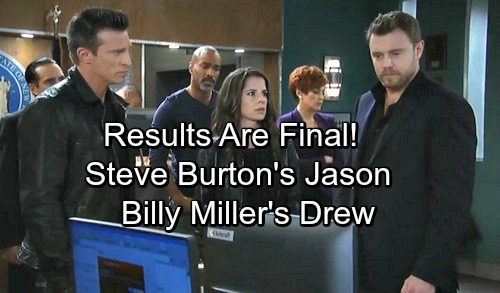 General Hospital (GH) spoilers reveal that the truth is out! Everyone can finally say what was suspected all along. Steve Burton is the one and only Jason Morgan! He was proven right thanks to Andre’s (Anthony Montgomery) confession and Spinelli’s (Bradford Anderson) solid evidence. Billy Miller is now Andrew Cain, so that’s sure to bring some difficulties for him.

Of course, GH also gave us some new information regarding the memory mapping study. Let’s recap the facts so we can see what we’re dealing with. Andre explained that Jason and Drew were unconscious when they were delivered to him. They had been sedated and he has no idea who the backer is or why these test subjects were chosen. 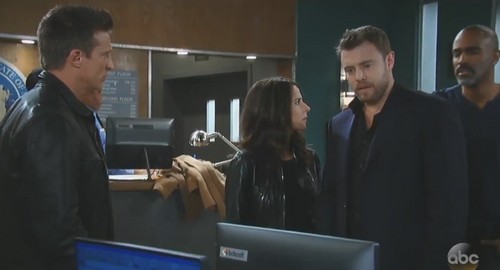 The mastermind’s goals remain a mystery, but General Hospital spoilers say more clues should come out soon enough. In the meantime, the fallout of the twin revelation will continue. Andre confirmed that he was sent to Port Charles after one test subject surfaced. He admitted that the backer ordered him to monitor Andrew Cain.

Drew accused Sonny (Maurice Benard) of paying Andre to make these claims, so it’s clear that ties have been severed. This memory mapping study has broken bonds and destroyed lives! Fortunately, Spinelli did some digging and was able to point Jordan (Vinessa Antoine) in the right direction. Thanks to Drew’s time as a Navy SEAL, they secured fingerprint confirmation. 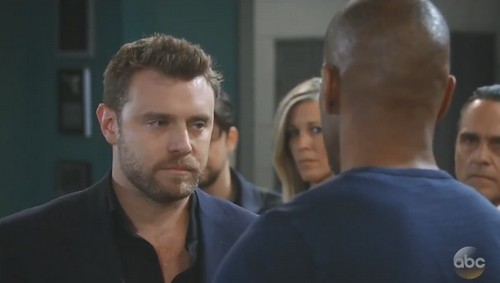 Poor Drew was still in denial. He suggested Spinelli could’ve hacked the system, but even Curtis (Donnell Turner) and Sam (Kelly Monaco) think he should give it up. Miller’s character is Drew and that’s that. Diane (Carolyn Hennesy) pointed out that the navy would have hard copies, so it seems GH doesn’t intend to flip-flop on this.

The good news is Sam will support Drew every step of the way. On Monday, she’ll promise that they’re in this together. Sam will make it clear that she loves Drew and has no intention of bailing on him. 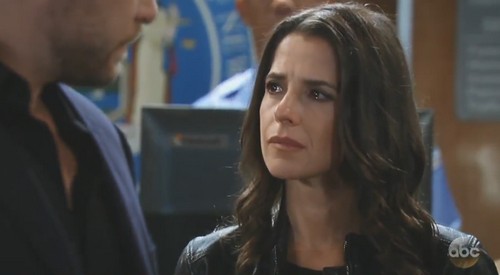 Alexis (Nancy Lee Grahn) will also have a chat with Jason in hopes of preventing more pain. She’ll remind him that Sam’s happy and that’s what’s important. Alexis won’t think Sam should have to give that up. Jason will undoubtedly agree that keeping Sam content is all he wants.

Nevertheless, things will remain complicated for the twins. General Hospital fans won’t want to miss the aftermath of this exciting revelation. We’ll give you updates as other GH details emerge. Stick with the ABC soap and don’t forget to check CDL often for the latest General Hospital spoilers, updates and news.