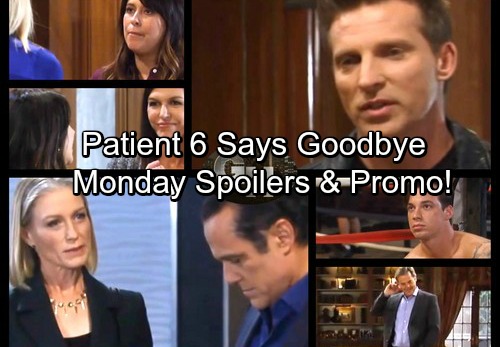 General Hospital (GH) spoilers for Monday, November 20, tease that Robin (Kimberly McCullough) will catch up with some loved ones. She already had an emotional chat with Patient Six (Steve Burton) on the footbridge, but she has to spread the love while she’s in Port Charles. GH wants to make the most of this visit.

Robin will enjoy spending some time with Felicia (Kristina Wagner and Mac (John J. York) before turning her attention to Anna (Finola Hughes). She’ll mention her mom’s new boyfriend and demand the scoop. Anna and Finn’s (Michael Easton) relationship is just a sneaky charade, but she’ll do her best to hide the truth and downplay the seriousness of it all.

Elsewhere, Cassandra (Jessica Tuck) will run into Sonny (Maurice Benard). She’ll suggest that he’s just the man she’s looking for. What’s Cassandra up to and how much trouble will she cause? General Hospital spoilers say Valentin (James Patrick Stuart) will land in hot water before long. Alexis (Nancy Lee Grahn) could also get caught in the crossfire of whatever Cassandra stirs up.

Meanwhile, Finn will have a conversation with Chet (Chris Van Etten) at the boxing gym. GH fans know Chet feels like a lost cause. He finally sees how much Amy (Risa Dorken) cares, so he’s probably struggling with some guilt right now. Of course, Chet has some drug problems as well. Finn will hope he can help Chet get through all his issues. He’ll insist that it’s not too late to fix things.

Other General Hospital spoilers say Ned (Wally Kurth) will want to talk to Michael (Chad Duell). He’ll think they need to discuss Jason (Billy Miller), his twin and the future of ELQ. You can bet that Michael and Ned will have different opinions. When it comes to business, they rarely agree about anything!

Finally, Patient Six will meet up with someone to say goodbye. Perhaps he intends to head out of town and find out more info on who kidnapped him. Carly (Laura Wright) might be the person P6 pops in to see. Classic Jason won’t be slipping away just yet, so maybe Carly will convince him to stick around for Thanksgiving dinner or at least some of the pre-meal festivities.

Regardless, Patient Six and Robin will talk again soon. It’ll lead to some interesting thoughts on the twin mystery and how they can solve it. Nathan (Ryan Paevey) will also deal with Ask Man Landers mayhem, so plenty of drama’s ahead. We’ll give you updates as other GH news comes in. Stick with the ABC soap and don’t forget to check CDL often for the latest General Hospital spoilers, updates and news.