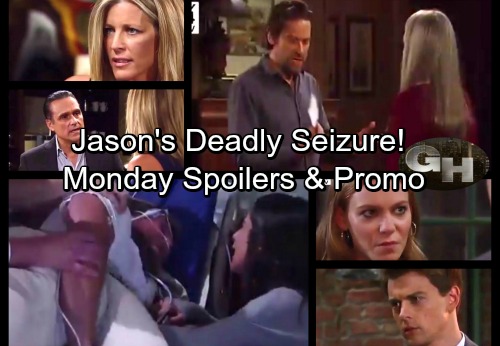 General Hospital (GH) spoilers for Monday, September 25, tease that Franco (Roger Howarth) will try to wrap his head around Betsy’s (Deborah Strang) revelation. She just admitted that there was indeed a twin; it just wasn’t Franco’s twin. Franco will push Betsy to reveal more. He’ll try to figure out who this kid is and where he might be now.

In St. Petersburg, Ava (Maura West) will get caught causing trouble. She’s not supposed to be anywhere near Patient Six (Steve Burton), but she just can’t stay away. Unfortunately, Ava just took it one step further by getting a phone number from this guy. She’ll probably manage to hide it, but she still won’t escape the wrath of her doctor. He’ll blast Ava for snooping before he offers a final warning. 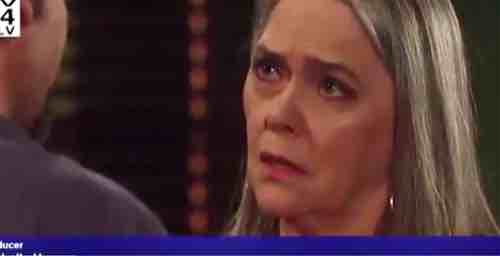 At Jason’s (Billy Miller) facility, Sam will panic over a sudden crisis. Jason just woke up, but his condition will quickly take a hit. It looks like Jason may have a seizure as his monitors go off. Sam will cry on the floor while the staff tries to help. She’ll tell Jason not to leave her and she’ll get her wish. However, there’s a good chance Jason will once again slip back into his coma.

Other General Hospital spoilers say Nelle’s (Chloe Lanier) disapproval will surprise Michael (Chad Duell). He thought he was doing a nice thing by purchasing Nelle’s apartment and giving her the deed. Nelle doesn’t have to move now, but she’s got bigger problems. This will feed right into Carly’s (Laura Wright) negative view of her. 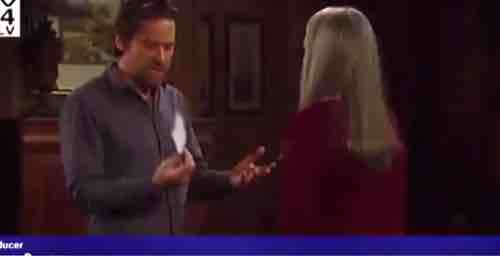 Nelle will note that Carly just accused her of being a black widow. She’ll wonder how Michael thinks this is going to look. Of course, Michael won’t care how his mom feels about his decision. He’ll insist that he loves Nelle and wants to keep her close by. Michael won’t believe anything else matters, but it’ll take some work to get Nelle on board.

Michael and Nelle don’t know it yet, but Carly is already in the loop. Sonny (Maurice Benard) figured out what Michael was up to, so the fallout is starting. GH spoilers say Carly will continue to rant about Nelle’s twisted web. Sonny will suggest that Carly’s overreacting a little. He’ll ask if she honestly believes Nelle is guilty of murdering her fiancé. 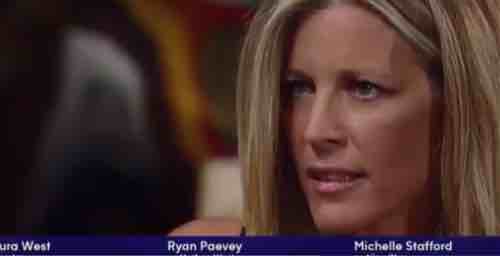 Carly will at least point out that they can’t be sure of Nelle’s innocence. Now that Michael has made this bold move, Carly will become even more determined to score evidence. Across town, General Hospital spoilers say Griffin (Matt Cohen) will have a run-in with Valentin (James Patrick Stuart). He’ll get irritated when Valentin stays tight-lipped about what happened with Ava.

Griffin will make a comment about how this could affect Valentin’s situation with Charlotte (Scarlett Fernandez). Nina (Michelle Stafford) will take that as her cue to chime in. She’ll argue that Griffin has no say in Charlotte’s custody.

It sounds like Monday’s episode will bring plenty of tension. We’ll give you updates as other GH news comes in. Stick with the ABC soap and don’t forget to check CDL often for the latest General Hospital spoilers, updates and news.