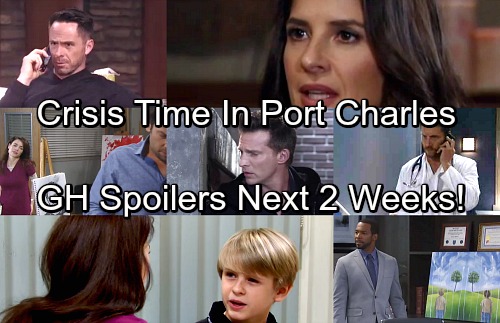 General Hospital (GH) spoilers for the next two weeks tease that several Port Charles residents will face drama. The week of October 23-27 will lead to some tricky situations. For starters, Sonny (Maurice Benard) will have to go with his gut. He won’t think Jason (Billy Miller) or his family members are at risk, but Ava’s (Maura West) actions will still be perplexing.

Perhaps Sonny will determine that Ava could be the key to sorting this mess out. Carly (Laura Wright) will get curious, so maybe she’ll get updates soon enough. Across town, Franco’s (Roger Howarth) art will offer some intriguing clues. He’ll be deeply disturbed as his past haunts him through his drawings.

Meanwhile, Maxie’s (Kirsten Storms) proposal could spell trouble. She just decided to take advantage of all being Mrs. Man Landers has to offer. Of course, Nathan (Ryan Paevey) just convinced Amy (Risa Dorken) to shut down the blog. Will Maxie give Nathan a reason to continue the ruse?

Sam (Kelly Monaco) and Jason’s party will have a stunning outcome a little later. Dr. Klein’s (Gene Farber) thugs are lurking, so a kidnapping might go down. Sam is certainly in grave danger right now. The week of October 30-November 3 will bring problems for Jason. He’ll have to rely on Curtis (Donnell Turner) for assistance with a crisis.

It’s possible that Jason will be trying to track down Sam, but don’t forget Patient Six (Steve Burton) is in PC. If a rescue is necessary, classic Jason might save the day. Scott (Kin Shriner) will also have huge news for Alexis (Nancy Lee Grahan). Could he reveal that Julian’s (William deVry) appeal paid off?

Whatever the case, Julian will indeed return to General Hospital during November sweeps. GH should offer some helpful hints before his release. Elsewhere, Cassandra (Jessica Tuck) will want to know more about Finn’s (Michael Easton) romance with Anna (Finola Hughes). He’ll work hard to keep the ruse going, but Cassandra will definitely be watching these two.

Franco (Roger Howarth) will continue to mull over Drew and what he might be up to. He’ll eventually make a choice that turns his life upside down. Will Franco begin a search for Jason’s twin? GH fans will see Liz (Rebecca Herbst) and Franco try to tackle some new challenges along the way.

Other General Hospital spoilers say Ava will be under suspicion, but she’ll suggest that she’s an open book. Ava will have to prove that she can be trusted, which could be difficult if Sonny’s involved! We’ll keep you posted as other GH details emerge. Stick with the ABC soap and don’t forget to check CDL often for the latest General Hospital spoilers, updates and news.