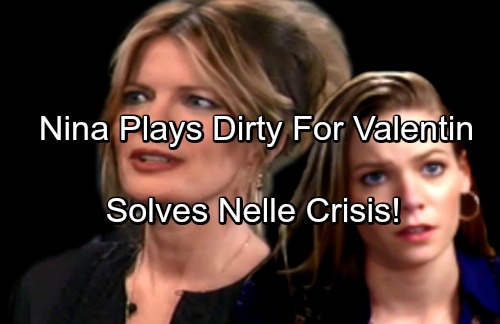 General Hospital (GH) spoilers tease that Nina (Michelle Stafford) will have to handle some tricky situations. First, Nina will come through for Nelle (Chloe Lanier). After a mugging landed Nelle in the hospital, Nina felt guilty for forcing her to spy on Valentin (James Patrick Stuart). She felt even worse when she found out Nelle had no family to support her.

Nina vowed to be someone Nelle could rely on and she intends to keep that promise. When Nelle ends up in a tight spot, Nina will pitch in. This might have something to do with Nelle’s employment. Things are a little up in the air since Valentin (James Patrick Stuart) is facing charges over the Chimera project.

Nelle’s nanny position may be out since Charlotte (Scarlett Fernandez) is going to be spending all her time at Lulu’s (Emme Rylan). Maybe Nina will come up with another job for Nelle. Whatever the case, Nina seems to be taking the former schemer under her wing.

Of course, Nelle’s well-being won’t be the only thing on Nina’s mind. GH spoilers say Nina will also face doubts about her divorce. It’s clear that Nina still loves Valentin, but can they truly overcome their issues? General Hospital spoilers say Valentin will eventually walk free, but Anna (Finola Hughes) could continue to be a reunion hurdle. 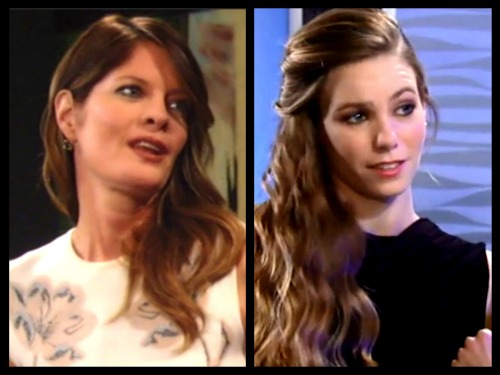 Many General Hospital fans are hoping Valentin and Anna will get together at some point. However, we could see Nina work it out with Valentin first. They may find their way back each other, but you can bet this is will be Valentin’s last chance. One more mistake and Nina could be on a new path.

In the meantime, a shocking phone call may lead to a sneaky move. The details haven’t been revealed yet, but it appears some news will force Nina to play dirty. Does this tie in with Valentin’s freedom? Nina would certainly do anything to reunite Charlotte with her papa.

Perhaps Nina and Anna will have to put their differences aside. Will they somehow work together to help Valentin? It might be fun to see how they tackle the tension. General Hospital spoilers tease that Nina may also have to deal with Maxie (Kirsten Storms) drama down the road. Nina is going to have a lot on her plate!

It sounds like General Hospital has some great material coming up. We’ll give you updates as other GH details emerge. Stay tuned to the ABC soap and don’t forget to check CDL often for the latest General Hospital spoilers, updates and news.