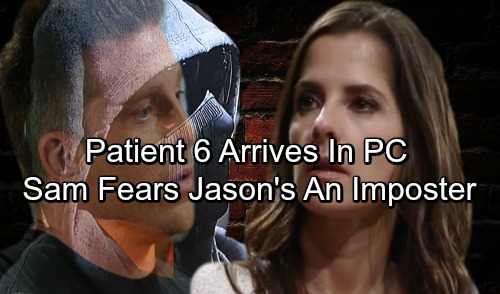 General Hospital (GH) spoilers tease that Sam (Kelly Monaco) will have some worries as Jason (Billy Miller) gets settled in at his new facility. She’ll speak up about her fears on September 29, but she probably won’t get the comfort she’s craving. There’s only one thing that could calm Sam down and that’s watching Jason open his eyes.

Sam will get what she’s wishing for eventually but GH intends to make her suffer a little longer – Jason makes a full recovery. General Hospital spoilers state that Sam will begin to lose hope. She’s been trying to stay strong for Jason and their kids, but it’ll be tougher once he’s at a long-term facility. Sam may believe Jason’s doomed to live there until the day he dies.

Of course, we have to remember what’s going on in St. Petersburg. Steve Burton’s (ex-Jason) character just removed his glasses at the clinic, so this storyline is clearly heating up. At some point, Patient Six will give Sam the shock of her life in Port Charles.

How will GH handle this big reveal? Sam could easily spot Burton’s character and come unhinged like she did with Sonny (Maurice Benard). Her doctors warned that she could face some setbacks in her recovery. Sam could view old Jason as an impostor and a threat to her family. 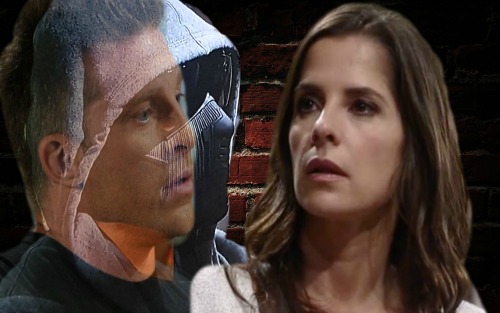 Then again, they could take a different route. Perhaps Miller’s Jason will finally awaken and get well enough to return home. General Hospital spoilers indicate that Burton’s hot plot is just getting started, so they’ve got plenty of time to set this up.

Let’s paint the picture. Just when Sam thinks all hope is lost, Jason will return to her. She’d be overjoyed and they’d both want to ditch the institution ASAP. They planned to focus on a safer life, so they’d definitely dive right into that. Sam and Jason could believe this is their shot at true happiness and real security.

Then, BOOM! Here comes Burton’s character. Jason and Sam would face another major obstacle. No matter how this plays out, Sam is sure to be a total wreck. How’s she supposed to handle the possibility that Jason isn’t really Jason?!

Franco (Roger Howarth), Sonny and Carly’s (Laura Wright) opinions aren’t going to make all of this any easier. It sounds like Sam’s struggles are only going to get worse from here. We’ll give you updates as other GH news comes in. Stay tuned to the ABC soap and don’t forget to check CDL often for the latest General Hospital spoilers, updates and news.