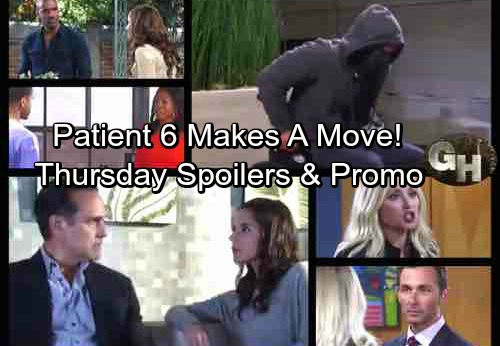 General Hospital (GH) spoilers for Thursday, September 21, tease that Ava (Maura West) just won’t be able to satisfy her curiosity. She’ll ask a doctor why Patient Six needs to be controlled. The staff has already explained this to Ava, but she obviously doesn’t buy that he’s all that dangerous. Ava feels like something strange is going on, but she can’t quite put her finger on it.

Nearby, Steve Burton’s (ex-Jason) GH character will rise to his feet. This guy behaves in unpredictable ways, so it should be interesting to see what he does next. As for Ava, she’ll get some optimistic updates. It sounds like she’ll be approved for all the necessary procedures.

Meanwhile, Sam (Kelly Monaco) will lean on Sonny (Maurice Benard) for support. Jason (Billy Miller) needs care at a long-term facility and that’s tough for Sam to handle. General Hospital spoilers state that Sam will compare the past with the present. She’ll confess that things have been different since Jason came back to her. He’s not quite the man he used to be.

Nevertheless, Sam loves Jason and she’s hoping he’ll return to her once again. Of course, a two-for-one Jason deal is headed her way. Steve Burton’s return will only create more complications. Across town, Valerie (Brytni Sarpy) will offer Curtis (Donnell Turner) some advice. She’ll fish for info on his love life and provide some words of wisdom.

When Curtis admits that he hit a rough patch with Jordan (Vinessa Antoine), Valerie will ask an important question. She’ll wonder if Curtis is willing to make sacrifices for Jordan’s sake. Curtis has to decide how much Jordan’s happiness is worth to him.

Elsewhere, TJ (Tequan Richmond) will grill Jordan about her latest relationship drama. It looks like he’ll call her out for giving up. Jordan will insist that she can’t afford to make any more bad choices, but it’s clear that she wants to be with Curtis. Maybe TJ will suggest compromising as a solution.

Other General Hospital spoilers say Lulu (Emme Rylan) will demand answers. After she wraps her head around Dante’s (Dominic Zamprogna) revelation, Lulu will approach Valentin (James Patrick Stuart). She’ll want to know exactly what he did to Ava Jerome. Lulu and Valentin were on the right track as co-parents, but this could be a huge setback.

Valentin will do his best to stay in control of the situation. He thinks he’s got the upper hand, but he could be losing his grip thanks to Patient Six! We’ll keep you posted as other GH news comes in. Stick with the ABC soap and don’t forget to check CDL often for the latest General Hospital spoilers, updates and news.