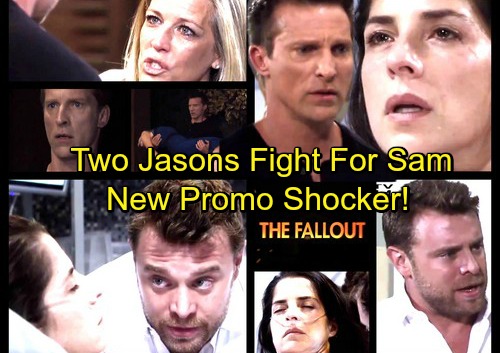 General Hospital (GH) spoilers reveal in a new promo video that things are about to go from bad to worse for Samantha “Sam” Morgan (Kelly Monaco) as she struggles with the reality of her situation. Two men (Billy Miller and Steve Burton) claiming to be Jason Morgan, which one is her rightful husband and which one is the impostor? The epic fallout begins this week and Patient 6’s dramatic attempt to save Sam is just the beginning!

GH fans know that Patient 6 revealed himself last week to Sonny Corinthos (Maurice Benard) and it didn’t take much for him to convince him that he was truly his long time confidant and right-hand man. Sonny encouraged him to come forward and reveal himself as the one true Jason Morgan to his beloved wife, Sam, but things went awry when the party Sam and the man who she believes to be Jason was interrupted by gunfire and she was abducted.

General Hospital spoilers show Sonny confronts Billy Miller’s Jason at General Hospital, where Jason talks to him about an impostor running around town. He sits at an unconscious Sam’s bedside and swears to her that he is “her Jason”, and he loves her.

Meanwhile, Steve Burton’s Jason meets with Carly Corinthos (Laura Wright), realizing he lost 5 years of his life. It is clear that it doesn’t take long for Carly to see that he is telling the truth and tells him that Sam deserves to know the truth and that he is alive.

General Hospital sources tease that original Jason takes her advice and goes to see Sam in the hospital. Sam is startled and sits up in her bed in disbelief. Will Sam accept him at his word, or will she feel like she is delusional again?

In any case fans can see now that this week will be wild as the battle of the two Jasons kicks off. Be sure to tune into ABC’s General Hospital (GH) to catch up on this incredible story and so much more. Check CDL General Hospital spoilers often for updates, news, rumors and spoilers!