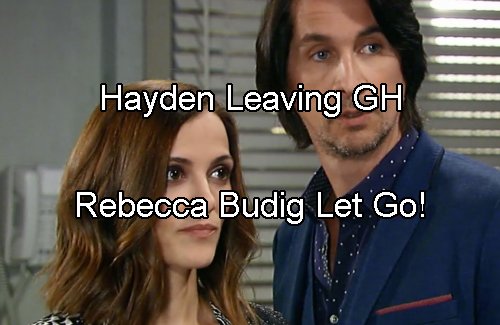 General Hospital (GH) spoilers reveal that Rebecca Budig will be leaving General Hospital and that the show is breaking her four-year contract. CDL broke the news in a post last week and confirmation is expected in this week’s Soap Opera Digest that Rebecca was let go, but how will GH explain Hayden Barnes’ sudden departure since she’s entangled in such a deep storyline? Rumors have been swirling on social media for weeks that Budig would be leaving, but now it’s confirmed.

Given the urgency of this news, it doesn’t seem likely that General Hospital will wait seven more months to kill off Hayden in childbirth. However, given her other health issues such as Blackwood Syndrome and her Zekenestrol drug usage (only to save her life and against her will), a health complication could be written into the script rapidly. Alternately, Hayden might leave town so the character remains available for the future, just in case.

Recent General Hospital scenes have Hayden telling Curtis Ashford (Donnell Turner) that she’s not certain that she wants the baby and doesn’t think she and Finn can give the kid a good life. Given headwriter Jean Passanante’s love of Planned Parenthood as her pet political cause, perhaps Jean wrote a plot with Hayden terminating her pregnancy. That would be sad and Finn would be heartbroken but since Jean is leaving soon, she might have written this as a final tribute to her politics on her way out the door. 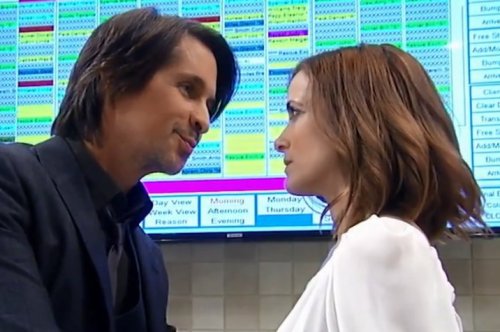 Will Hayden die? There’s supposedly a mob war brewing in Port Charles since Sonny Corinthos (Maurice Benard) wants out of the cartel and Carly Corinthos (Laura Wright) speculated that if he leaves the business, there will be a turf war to take over his territory. Hayden could be shot down as part of escalating mob violence which would leave Hamilton Finn (Michael Easton) with a ton of grief, a grudge, and a very compelling storyline to work with in her absence.

Alternately, since Hayden has never met her dad Jeff Webber (Richard Dean Anderson), she might take off to Africa to finally meet him and do some soul searching while getting to know her mystery father. Hayden also has her mom Naomi Dreyfus (Robin Riker) to run to if life in Port Charles doesn’t suit her fancy anymore. No matter what GH does, it’s clear that Liz Webber (Rebecca Herbst) is about to lose her half-sister Hayden one way or another. 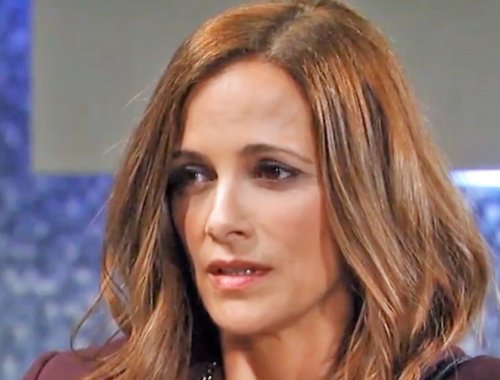 Rebecca Budig was initially brought in for just a few weeks so Hayden could partner with Ric Lansing (Rick Hearst) and then get shot and die. However, they put her in a coma instead, then decided to thaw her out months later and write the actress a four-year contract. It’s strange that Frank Valentini gave her such a lengthy deal when other legacy actors were subsisting on year to year deals and aggressive contract renewals.

What do you think GH fans? Will you miss Rebecca Budig and her character Hayden? Share your comments below on this major casting shakeup at GH and come back to CDL often for the latest General Hospital spoilers news and updates.