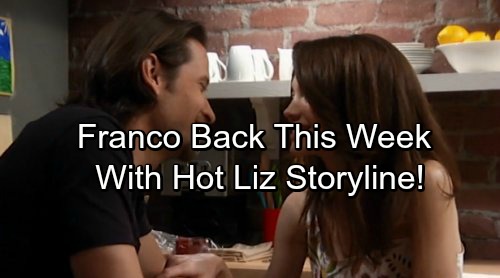 General Hospital (GH) spoilers happily announce Roger Howarth will be back as Franco Baldwin this week which was confirmed by one of General Hospital’s head writers, Shelly Altman. Roger’s fans have been in a tizzy regarding Roger Howarth’s absence after talks broke down over his contract; but the worst is over and the fan favorite will be back on screen this coming week.

Although Roger Howarth is a brilliant actor and has entertained ABC daytime drama fans for years, viewers were divided over his character and the actions he has done over the years. Of course we all remember when Franco (then-James Franco) made Sam Morgan (Kelly Monaco) believe he raped her and her son, Danny was his – but when Roger Howarth took over, fans were led to believe all his dastardly deeds were because of a brain tumor. 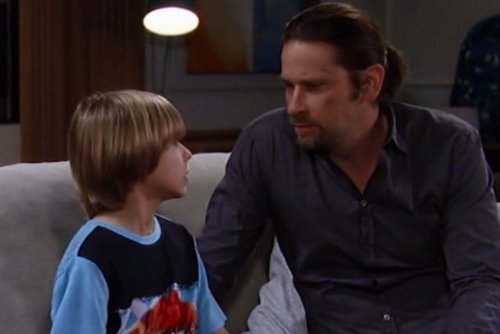 General Hospital’s Franco then showed a softer side, especially when he fell in love with a mentally fragile Nina Reeves (Michelle Stafford). He even became a fatherly figure for Kiki Jerome (Hayley Erin) when her father, Dr. Silas Clay (Michael Easton) was found murdered in his apartment. Franco then acted very precariously when he helped Nina kidnap a newborn, Avery Corinthos, making some wonder if his evilness was truly because of a tumor.

Roger Howarth did a fantastic job making viewers really question his sanity and how far he was willing to go to protect someone he loved when he abducted and trapped Tom Baker (Don Harvey) in a cage with a shock collar around his neck; earning him the nickname “Freako”.

Currently, Franco is deeply in love with General Hospital nurse, Elizabeth “Liz” Webber (Rebecca Herbst) and has become a true friend and guide for her often misunderstood son, Jake Webber (Hudson West) in spite of his father, Jason Morgan’s (Billy Miller) hatred of the man. Most would say that Jason’s hatred for Franco is fully justified after the mental torture and assault he committed on his wife, Sam.

GH viewers were left hanging when Franco moved in with Liz and her 3 boys and then suddenly vanished off screen, even missing the memorial for his paternal grandfather, Dr. Lee Baldwin (the late-Peter Hansen). His quirky presence has been deeply missed in Port Charles, including his odd friendship with Dr. Liesl Obrecht (Kathleen Gati). Who is looking forward to the Franco and Liz reunion? These two have been apart long enough, no?

Be sure to tune into ABC’s General Hospital (GH) to catch up on everything happening in Port Charles and do not miss the return of Roger Howarth as Franco Baldwin. Check CDL General Hospital spoilers often for updates and news!  Sign up for our FREE newsletter by clicking here and get the latest breaking soap news!