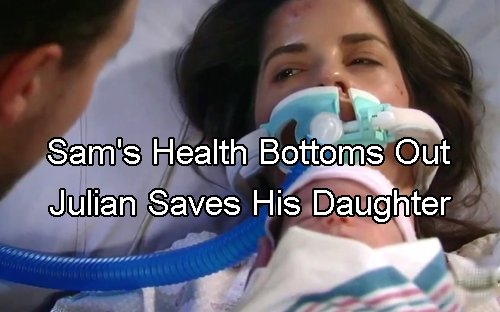 General Hospital (GH) spoilers reveal that Sam Morgan (Kelly Monaco) has something seriously wrong with her that’s causing her to be sweaty, irrational, angry, hallucinate noises and visions, and now sleepwalk to grab dangerous cutlery from her kitchen. What’s up with Sam? It’s too far after the birth of her daughter for post-partum depression to crop up out of the blue, so something else is at play.

General Hospital buzz is that Sam could have cancer like her son Danny Morgan (TK Weaver) had. Danny had leukemia and Sam might too. Although leukemia doesn’t run in families, some genetic conditions can make people in families more likely to get it. That means Sam and Danny might share a genetic flaw that makes them both more susceptible to this potentially fatal illness.

If Sam’s symptoms are caused by leukemia, it could be that Julian Jerome (William deVry) could be redeemed if he saves her life just like he did Danny’s years ago. When Julian first came to Port Charles, he was in disguise as Derek Wells and trying to keep his past as a Jerome hidden. But Julian came out from hiding and risked everything to save his grandson Danny. 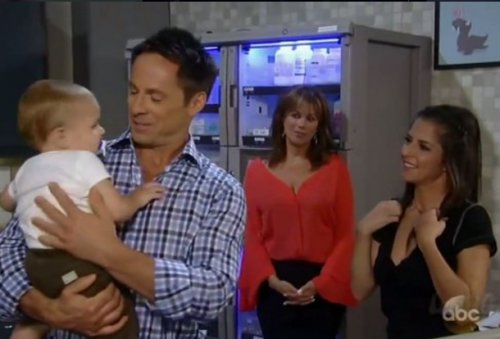 This time, if Sam needs a bone marrow donation (or something else she can only get from her father), that’s good news for Julian who desperately needs redemption. Although Julian was committed to staying clean of the mob to keep his promises to Alexis Davis (Nancy Lee Grahn), it was his awful sister Olivia “Liv” Jerome (Tonja Walker) that made him get back into the life.

But it seems that Sam and others aren’t ready to forgive him. Alexis is warming up a little, but she’s the only one. But if Sam’s illness is something that a donation from Julian can help heal, that could save Sam and Julian both. Even Jason Morgan (Billy Miller) would have to be kinder to his father in law if he’s the one that brings Sam back to normal.

General Hospital spoilers tease that Sam’s story with this illness will stretch out for much of the summer so we won’t know for a while yet exactly what’s ailing Sam. What makes this situation all the more dangerous is that Sam isn’t telling anyone the truth about her symptoms. In fact, it could be Sam’s symptoms that prevent her from coming clean. Maybe her brain is fighting the truth. 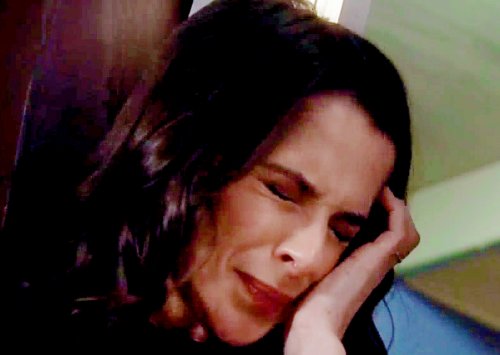 Sam will continue to spiral out of control as those around her worry about what’s making her behave so erratically. But unless Sam lets those who love her know that something is wrong, this crisis could go on and on and put Sam’s health and family as risk. Can Julian save his daughter’s life and redeem himself at the same time?

Is Sam suffering from the same cancer that almost killed her son? How far will things get before her loved ones realize she needs medical attention? Share your comments on Sam’s medical crisis and tune into CDL often for the latest General Hospital spoilers, news and updates.