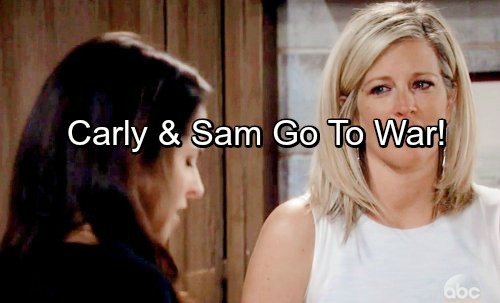 General Hospital (GH) spoilers reveal that Sam Morgan (Kelly Monaco) is spiraling out from whatever illness is addling her brain and she will soon confuse the Sonny Corinthos (Maurice Benard) in her brain that is taunting her with real life Sonny. Sam is furious that Sonny continues to put Jason Morgan’s (Billy Miller) life at risk.

Since Jason came back from Puerto Rico with a gunshot wound in his arm, Sam is furious. Jason informed Sam that Carly Corinthos (Laura Wright) was the one that shot him, but Sam doesn’t want to hear it. Jason went to save Sonny from danger and he was shot in doing so. Again. Jason has been injured so many times trying to protect Sonny.

Sam is right to be mad. Why should Sonny’s life be worth more than Jason’s? There’s no reason that Jason should face down the barrel of a gun to save Sonny from his own bad choices. This latest situation is totally Sonny’s fault because of his life of crime. Garvey came looking to kill Sonny because he killed Garvey’s brother. 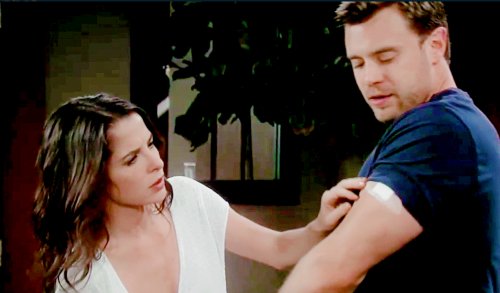 Instead of acting contrite at all, Sonny mocked Garvey’s pain over the loss of his brother. At that point, Sonny was being awful. After the shooting incident, Sonny suddenly decided that he wants to turn over a new leaf and get out of the mob. No doubt it was the fear of finally losing Carly rather than a desire to do right or go legit for ethical reasons.

Unfortunately for Sonny, Sam has already lost her marbles and is furious at him. General Hospital spoilers say that next week, July 3 to July y, Sam has had enough of Jason’s life being at risk. To make things worse, Sonny trying to get out of the business might put Jason at even more risk and Sam won’t allow that to happen. As the week’s action starts, Sam’s health concerns worsen.

Then, Sam can’t hold her tongue anymore and warns Sonny to stay away from Jason or else. General Hospital spoilers reveal that Jason is stunned and wants her to see a doc. Sam does but then lies to Jason about how it went because she believes Sonny is the problem, not her. Carly doesn’t like it when Sonny reports back to her that Sam is threatening him. 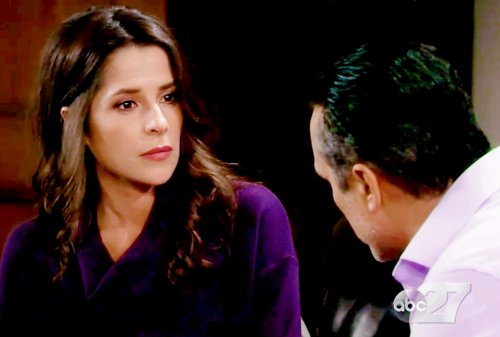 Carly is about to give everything she wants – Sonny out of the mob and her happily ever after. Now Sam is messing with Carly’s program. Longtime General Hospital watchers know Sam and Carly have a messy past. All those old wounds will reopen when Carly confronts Sam after Sam threatens Sonny. Sam won’t take it. She won’t allow Carly to get her happy ending at the cost of the Morgan family.

Sam is right. Jason’s life shouldn’t be at risk to cover for Sonny’s criminal activities or the bad choices of his past. It’s understandable that Carly wants a happy life with Sonny, but as someone who claims to care about Jason, it seems like Carly shouldn’t want Jason in the line of fire either. Who will the war of these women? Share your comments below and tune into CDL for more General Hospital spoilers.