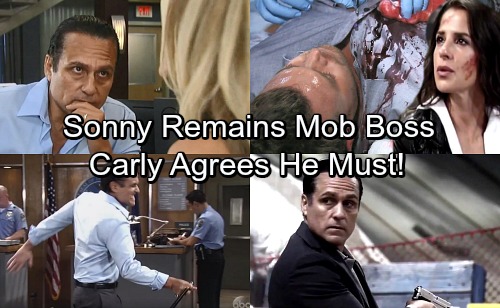 General Hospital (GH) spoilers reveal Sonny Corinthos (Maurice Benard) really thought he had a chance to leave the criminal element of his life behind him and move forward in peace after he assigned Max Giambetti (Derk Cheetwood) as his replacement at the head of the Corinthos Organization; but recent events may have changed his mind!

General Hospital spoilers tease that after Sonny announced his retirement along with his former enforcer, Jason Morgan (Billy Miller), things appeared to be approved but everything went tragically wrong at the docks when Jason was shot and is currently unconscious in the hospital.

Both Sonny and his wife, Carly Corinthos (Laura Wright) were looking forward to a life outside and away from the mob but now that their nearest and dearest friend is fighting for his life; they both had a huge reality check! 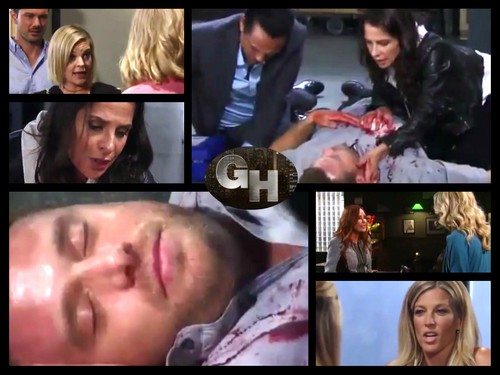 Carly was the reason Sonny was leaving the mob when she pretty much gave him an ultimatum. Sonny loved her far more than his power and wealth as head of the Corinthos Family but after both he and Jason were shot within a week of each other. It looks like Sonny is going to have to step back into his shoes as don and take back his seat at the table.

Fans of General Hospital will clearly see both Sonny and Carly struggle with the decision because its not what they wanted – but both know it is absolutely necessary for him to return to the power for his and Jason’s families to survive living in Port Charles. Although we do have to wonder what will happen with the power couple. Will Carly be able to go back to her old ways and stand back while her husband turns back into the all powerful mobster he can be?

General Hospital spoilers reveal the struggle is going to be real. Carly had just informed her teen daughter, Josslyn “Joss” Jacks (Eden McCoy) that she wants them to move back to Sonny’s house and be as family again. What will his re-established mob father status mean for what was supposed to be a happy family reunion?

Be sure to tune into ABC’s General Hospital (GH) to catch up on everything happening in Port Charles right now and don’t miss what Sonny’s return to the mob will mean for everyone he knows and loves. Check CDL General Hospital spoilers often for updates and news!