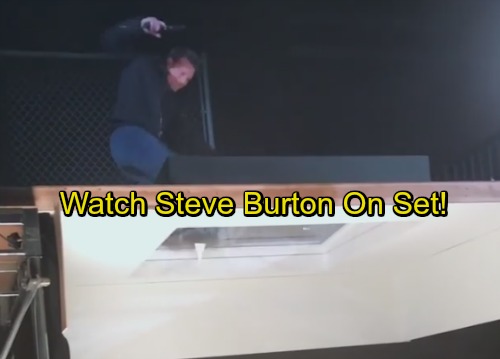 General Hospital (GH) spoilers reveal an exciting behind-the-scenes video featuring Steve Burton. It details Patient 6’s daring rescue during the media party, in which the company was renamed to Aurora. Keep reading and look at the clip to see the dramatic scene recorded from the set.

On Friday’s episode of GH, Sam (Kelly Monaco) was unconscious and was dragged out of the party. Meanwhile, guns were going off and it was complete chaos. The guests were petrified and for good reason. Patient 6 wasn’t going to let anything happen to Sam. This prompted him to go into action.

General Hospital spoilers from the behind-the-scenes video show Steve Burton crouching over the skylight on the roof. He can be seen peering down and holding his gun. At one point, Patient 6 starts viciously kicking in the window, which fans saw on last week’s GH. 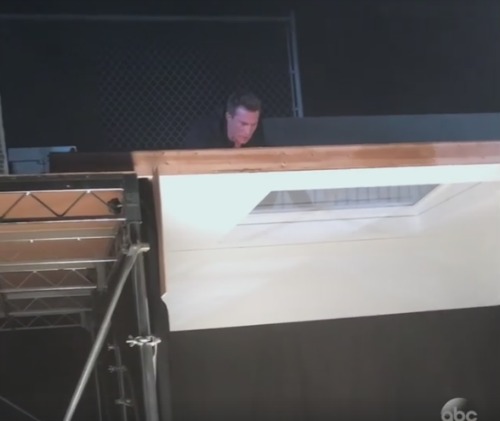 It was a dramatic scene, and everyone is still raving about his performance. It was thrilling and exciting to see him really go into action.

What else was interesting was Griffin (Matt Cohen) and Ava (Maura West) not being exactly welcoming to the media party. However, that didn’t stop them from alerting others to the thugs they saw in Russia. This kind of alert isn’t surprising from Griffin. However, it was from Ava, especially after being sternly told to leave.

General Hospital spoilers revealed that there would be more dramatic scenes. One was of Patient 6 getting close to saving Sam. However, she was suddenly pushed into the water. What is going to happen next? Will Steve Burton’s character be able to save Sam? Keep watching the ABC soap and check back with CDL for the latest General Hospital spoilers, updates and news.