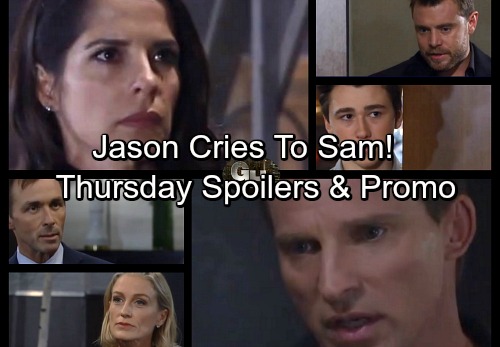 General Hospital (GH) spoilers for Thursday, December 14, tease that Finn (Michael Easton) will continue to gripe about moving in with Anna (Finola Hughes). Since he won’t back down on making a deal with Cassandra (Jessica Tuck), Anna will insist this is how it has to be. She’ll think she can keep tabs on Finn if he’s living under the same roof.

Finn still won’t be happy about it, but Anna will suggest that there’s an easy solution. If Finn declines Cassandra’s offer, Anna will gladly put an end to his suffering. Of course, Anna won’t get her wish. Finn’s determined to chase this opportunity and GH needs a way to move “Fanna” along. Now that they’re going to be living together, sparks should really start to fly.

Meanwhile, Valentin (James Patrick Stuart) will give Cassandra a warning. He’ll snap that both Wyndemere and his family are off limits. Valentin doesn’t want Cassandra coming to his home and stirring up trouble. It seems Cassandra’s not the only one interested in doing that. General Hospital spoilers say Nina (Michelle Stafford) will catch Lulu (Emme Rylan) snooping on Thursday.

Nina will wonder what Lulu thinks she’s doing, but it should be obvious to GH fans. Lulu’s pursuing her next big story! She needs to make a splash with Peter (Wes Ramsey) and rummaging through Valentin’s belongings is the first step. However, Lulu may have a tough time getting Nina on board with her investigation.

Other General Hospital spoilers say Monica (Leslie Charleson) will get on Kim’s (Tamara Braun) bad side. It looks like Kim will misunderstand Monica’s motives. She’ll contend that she’s made it on her own with Oscar (Garren Stitt) thus far. Drew’s (Billy Miller) welcome to be in Oscar’s life, but Kim won’t be interested in Quartermaine cash or Monica’s pushiness.

While Monica defends her good intentions, Drew and Oscar will try to get to know each other. Unfortunately, their discussion may not go as well as Oscar hoped. GH spoilers hint that he’ll be a little disappointed after Drew heads out. These two have some work to do if they expect to bond.

Across town, Jason (Steve Burton) will pour his heart out to Sam (Kelly Monaco). She’s been shutting him out because of her loyalty to Drew, but Jason will think there’s something she needs to hear. General Hospital spoilers state that Jason will mention his stint in the clinic. He’ll admit that the thought of seeing Sam again gave him strength. Without that hope, Jason probably wouldn’t be alive.

Some touching moments are coming up. We’ll give you updates as other GH news emerges. Stick with the ABC soap and don’t forget to check CDL often for the latest General Hospital spoilers, updates and news.