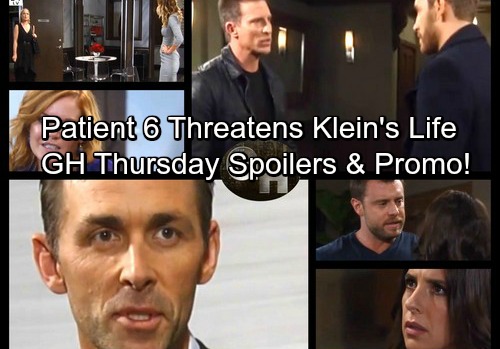 General Hospital (GH) spoilers for Thursday, November 9, tease that Patient Six (Steve Burton) and Sonny (Maurice Benard) will continue to seek answers from Dr. Klein (Gene Farber). The doc insists that he’d tell them if he knew the identity of his boss. A phone call just came in on Dr. Klein’s phone, so will Sonny and Patient Six push him to pick up?

It’s possible that some sort of meeting will be arranged. Patient Six will ask Dr. Klein how much his life is worth. The nervous doc had better do what he’s told or else. However, it’s doubtful Sonny and P6 will make a ton of progress just yet. GH probably wants to save the boss revelation for down the road.

Meanwhile, Valentin (James Patrick Stuart) will fume over Nelle’s (Chloe Lanier) threat. She suggested she had the ability to blow his marriage out of the water. Nelle might show off the pic she took of Valentin and Cassandra’s (Jessica Tuck) kiss. She’ll at least allude to evidence that could end Nina (Michelle Stafford) and Valentin’s relationship for good.

Valentin will snarl that Nelle just made a terrible mistake. General Hospital spoilers hint that Nelle should sleep with one eye open from now on. In Nina’s office, Cassandra will hope to collect on the lunch she proposed. Nina may be surprised by how much Cassandra knows about her life. They’ll share some weird moments and Cassandra will note that she can be very resourceful when it’s important.

Across town, Jason (Billy Miller) will have another chat with Sam (Kelly Monaco). His insecurities will bubble up again as he urges her to admit Patient Six is an impostor. Unfortunately, Sam just doesn’t seem ready to make that declaration yet.

Other General Hospital spoilers say Kiki (Haley Erin) will give Ava (Maura West) some encouragement. She’ll be glad that Ava and Griffin’s (Matt Cohen) romance is going well. Kiki will contend that this is a whole new start for Ava. She’ll be proud of the path her mom is headed down, but something tells trouble will find Ava soon enough!

Later, Josslyn (Eden McCoy) and Oscar (Garren Stitt) will pay Sonny a visit. He’ll wonder why they’ve stopped by to see him. Josslyn will confess that they need Sonny’s help with something. Is this about finding Oscar’s father? Since the teens have exhausted all other options, perhaps Josslyn’s hoping Sonny can use his resources.

It sounds like Thursday’s episode will bring plenty of excitement. We’ll give you updates as other GH news comes in. Stick with the ABC soap and don’t forget to check CDL often for the latest General Hospital spoilers, updates and news.