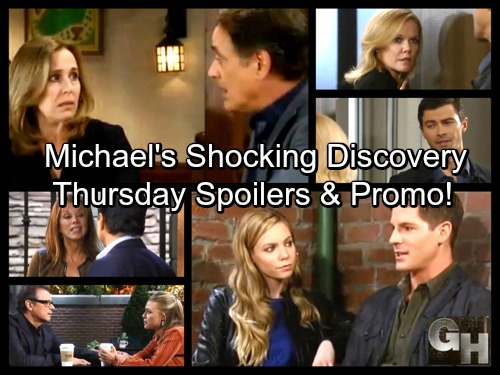 General Hospital (GH) spoilers for Thursday, October 12, tease that Kevin (Jon Lindstrom) will try to convince Laura (Genie Francis) that marriage is the right move. He just stunned her with a proposal, but Laura still needs to give her answer. Kevin will insist that he wants to spend the rest of his life with Laura. He’ll hope that she’ll do him the honor of becoming his wife.

Laura and Kevin’s relationship is certainly in a good place. She doesn’t know what she’d do without him, so maybe a yes is on the way. Meanwhile, Griffin (Matt Cohen) will explain why he showed up to see Ava (Maura West). He’ll confess that he’s had her on his mind and there are some things they need to discuss.

Will Griffin offer any hints about his feelings? General Hospital spoilers indicate that Griffin and Ava’s connection will grow even stronger soon. It’s looking more and more like Griffin’s days as a priest are behind him. He’ll have to make an official decision in the near future.

Across town, GH spoilers say Kiki (Haley Erin) will open up to her mentor. Dr. Bensch (James DePaiva) will continue to show his softer side as Kiki cries over her guilt. Part of her feels like she should cut Ava out of her life for what she did to Morgan (Bryan Craig). Another part of her can’t bear to lose her mom.

Since Ava switched Morgan’s meds because of Kiki, that adds to her drama. She can’t help but feel responsible on some level. It’s not clear how many personal details Kiki will reveal, but Dr. Bensch will undoubtedly offer helpful advice.

Other General Hospital spoilers say Dillon (Robert Palmer Watkins) will confide in Nelle (Chloe Lanier). He’ll admit that Kiki’s been shutting him out lately. Dillon supports Kiki’s new career path, but he wishes they could find a better balance of work and play.

Of course, Nelle’s romance isn’t exactly on solid ground either. She’ll hope that her recent move will pay off, but she can’t be sure. Elsewhere, Michael (Chad Duell) and Carly (Laura Wright) will be shocked by a $50,000 donation to Morgan’s foundation. It’ll be from an anonymous source, but Michael will still seek answers.

Did Nelle sell the ring and donate all the cash? Nina (Michelle Stafford) suggested that actions speak louder than words. A $50,000 donation could make a huge statement. Unfortunately, Curtis (Donnell Turner) has uncovered disturbing info in Florida and it’ll put Nelle in a tight spot.

Alexis (Nancy Lee Grahn) will also pay Sonny (Maurice Benard) a visit in hopes of stopping Kristina’s (Lexi Ainsworth) madness. Will Sonny pitch in or butt out? We’ll give you updates as other GH news comes in. Stick with the ABC soap and don’t forget to check CDL often for the latest General Hospital spoilers, updates and news.