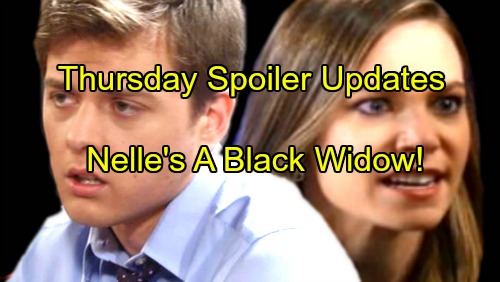 General Hospital (GH) spoilers updates for Thursday, October 12, tease that Curtis (Donnell Turner) will find out something shocking. He’s investigating Nelle (Chloe Lanier), but his findings won’t be what Michael (Chad Duell) was hoping for. It appears Curtis will call Michael up, but he won’t be ready to reveal his news yet. He’ll think that this revelation should be delivered in person.

It turns out Nelle is an expert swimmer, so that will obviously stir up more doubts about her version of events. If she was so skilled in the water, why didn’t she save Zack? Naturally, Nelle will have a reasonable explanation. Perhaps she’ll blame it on the icy water and strong current. Is Nelle a Black Widow spider as the new GH promo teaser video below suggests?

Of course, that confrontation will come in a later episode. For now, Michael will wait on Curtis and check out an anonymous donation. General Hospital spoilers say Michael will fill Carly (Laura Wright) on a $50,000 gift to Morgan’s (Bryan Craig) foundation. They’ll wonder who decided to be so generous. 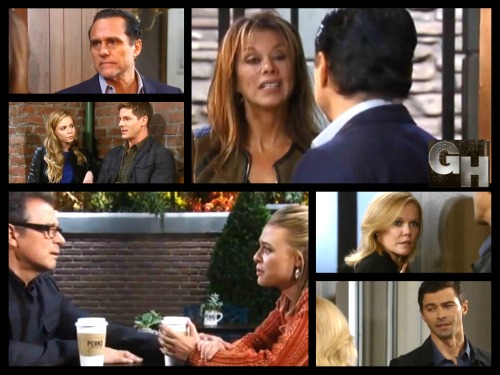 Since Nelle recently made a secretive phone call, she might be the mystery donor. That engagement ring looked like it could’ve been worth 50 grand. If Nelle’s indeed behind this, we’ll see how that works out for her.

In the meantime, Nelle will give Dillon (Robert Palmer Watkins) some support. He’ll be feeling pretty blue about the situation with workaholic Kiki (Haley Erin). Dillon just isn’t sure Kiki has room for him in her busy schedule.

Kiki will have someone besides Dillon on her mind in Thursday’s GH episode. She’ll continue to mull over Morgan’s tragic death and Ava’s (Maura West) role in it. Kiki will feel guilty since the med swap was a misguided attempt to protect her. Fortunately, Dr. Bensch (James DePaiva) will be happy to offer his usual words of wisdom. 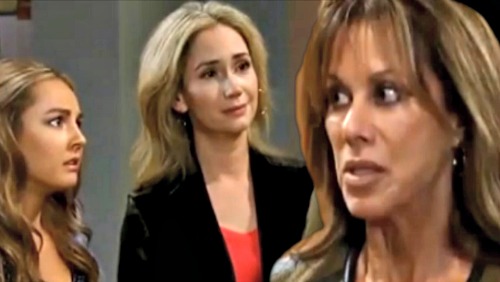 Other General Hospital spoilers state that Laura (Genie Francis) will try to process Kevin’s (Jon Lindstrom) request. He just asked her to marry him, so Laura will have to figure out if she’s prepared take that step. There’s a good chance Laura will get on board eventually.

Across town, Alexis (Nancy Lee Grahn) will give Sonny (Maurice Benard) updates on Kristina’s (Lexi Ainsworth) impulsive decision. She’ll insist that they have to stop her from leaving Port Charles with Parker (Ashley Jones). Kristina is awfully stubborn, so Alexis may have to accept defeat.

Finally, Griffin (Matt Cohen) will let Ava know that he couldn’t stay away. Will he pour out his heart soon? We’ll keep you posted as other GH details emerge. Stick with the ABC soap and don’t forget to check CDL often for the latest General Hospital spoilers, updates and news.