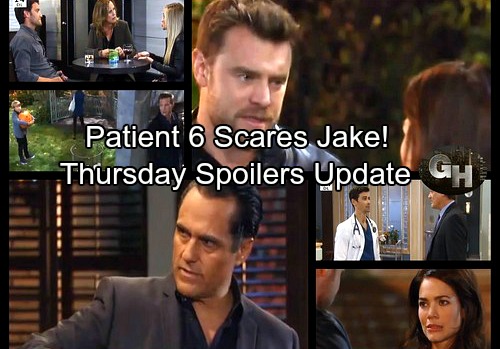 General Hospital (GH) spoilers for Thursday, October 19, tease that Jake (Hudson West) will get a bit spooked at the park. It seems he’ll hear some rustling after he returns from picking out a pumpkin. Jake will look around and wonder who’s there. He may blame it on his imagination and scamper off eventually. However, someone will indeed be lurking. It’s poor Patient Six (Steve Burton)!

While Burton’s character copes with the near-miss, Sonny (Maurice Benard) will try to figure out what Ava’s (Maura West) up to. He’ll examine Patient Six’s message and interrogate Ava about her involvement. Sonny will demand to know where Ava got this note. He’ll definitely be rattled by whatever he reads.

Across town, Jason (Billy Miller) will urge Liz (Rebecca Herbst) to be honest with him. He’ll understand why Liz might be protecting Franco (Roger Howarth), but he won’t think keeping secrets is a good idea. Jason will argue that Liz will just cause more trouble if she stays silent. He’ll hope that she’ll fill him in on what she’s been hiding.

As Liz faces pressure from Jason, Franco will push Betsy (Deborah Strang) for additional info. He’ll want to find out where Drew went after Betsy gave him away. Franco will probably reach a dead end, but it won’t be too long until he gets another piece of the puzzle. He should be able to help with the twin Jason mystery down the road.

Other General Hospital spoilers say Griffin (Matt Cohen) will feel a little distracted at GH. He believes leaving the priesthood was the right thing to do, but now he’s facing a whole new world. Fortunately, Kevin (Jon Lindstrom) will provide some guidance in Thursday’s episode. Griffin doesn’t have a lot of romantic experience, so he’ll just have to do his best.

In the meantime, Lulu (Emme Rylan) will also dish out advice. Once Laura (Genie Francis) mentions Kevin’s impromptu proposal, Lulu will offer her thoughts on the matter. She won’t think Laura should keep waiting around for the ideal circumstances or perfect moment. Lulu will encourage Laura to just accept what’s meant to be and go after her happy ending.

It sounds like GH fans could hear wedding bells pretty soon. Are you ready to see Kevin and Laura tie the knot? Is this a couple that’s built to last? We’ll give you updates as other General Hospital news comes in. Stay tuned to ABC’s GH and don’t forget to check CDL often for the latest General Hospital spoilers, updates and news.