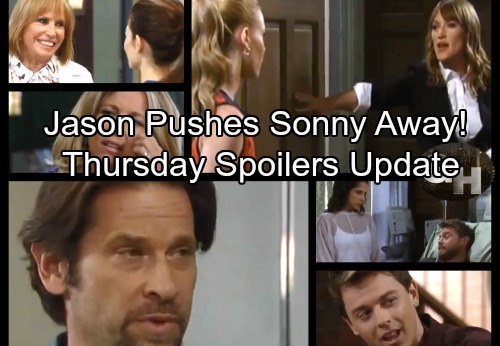 General Hospital (GH) spoilers for Thursday, September 28, tease that Nelle (Chloe Lanier) will urge Sharon Grant to get lost. She’ll try to slam the door in her face, but Sharon won’t allow it. It’s clear that she has a few things to get off her chest. Sharon will wonder if Nelle honestly thought she could run away from what she did to Zack.

Nelle will reiterate that she had nothing to do with Zack’s death. She’ll argue that it was simply an accident, but Sharon will be determined to prove her guilt. If nothing else, Sharon will want to prevent Nelle from targeting another victim.

Meanwhile, Carly (Laura Wright) will hope to get through to Michael (Chad Duell). Bobbie (Jacklyn Zeman) has a party coming up, but Michael is opting out. Thanks to her chat with Sharon, Carly will view that as a red flag. She’ll hint that Nelle is already pulling Michael away from the family. 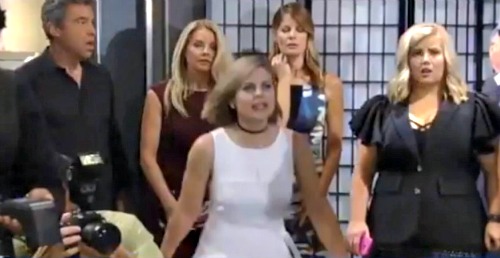 Michael will decide he’s had enough of the constant Nelle bashing. He’ll urge Carly to butt out and let him handle his own love life. Michael is a grown man and Carly has no business interfering. Elsewhere, Maxie (Kirsten Storms) will want Spinelli (Bradford Anderson) to cool it as well. She’ll suggest that she can explain everything if he’ll just calm down.

Nathan (Ryan Paevey) inadvertently exposed himself as Man Landers, so he’ll have some major drama to deal with. While Maxie fills Spinelli in, Nathan will face questions from the press. Mac (John J. York) and Felicia (Kristina Wagner) will certainly be taken aback by Nathan’s revelation. They’ll struggle to understand why Nathan kept them out of the loop.

Other General Hospital spoilers say Franco (Roger Howarth) will reach a surprising conclusion. GH fans know Franco’s beloved painting was sold by mistake at the exhibit launch. He’ll uncover the identity of the anonymous buyer in Thursday’s episode, so maybe he’ll have a chance to get it back. In fact, Liz (Rebecca Herbst) may have been working on that all along.

Speaking of Liz, she’ll talk to Monica (Leslie Charleson) about some great news. It looks like everything will be going Monica’s way. At some point, GH spoilers say Sam (Kelly Monaco) and Monica will discuss Jason’s (Billy Miller) improving condition. It’ll be a huge relief for these devoted loved ones.

When Sonny (Maurice Benard) stops by to see Jason, he’ll learn that his trusted pal is taking a step back. Jason will indicate that he just can’t afford to take any more risks. He’ll insist that he still cares, but he can’t keep putting his family through this.

After everything Jason endured, Sonny will undoubtedly understand. However, big changes are brewing once Steve Burton’s character hits town. We’ll give you updates as other General Hospital details emerge. Stay tuned to the ABC soap and don’t forget to check CDL often for the latest General Hospital spoilers, updates and news.