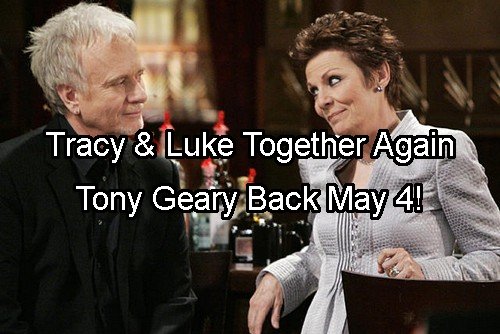 General Hospital (GH) spoilers reveal we’re just one day ahead of Tracy Quartermaine’s (Jane Elliot) final exit from Port Charles. On the Wednesday episode of GH, Tracy announces to the assembled Quartermaines and guests that she’s going to devote her golden years to charity.

That doesn’t sound like Tracy at all. In fact, it sounds like she raided the Q mansion liquor cabinet before calling everyone together to hold her final court in Monica Quartermaine’s (Leslie Charleson) house. Hamilton Finn (Michael Easton) doubts Tracy’s motives and Hayden Barnes (Rebecca Budig) lets her jaw drop.

And what about Tracy’s sons? Ned Ashton (Wally Kurth) is renouncing the Ashton moniker to become a full fledged Quartermaine so at least the Qs will have a new de facto patriarch in Ned. Monica doubts this announcement since Tracy doesn’t seem to have a charitable bone in her body. 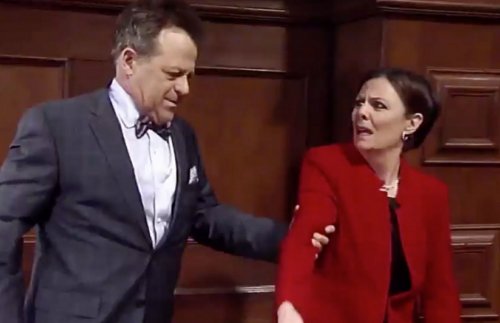 However, it seems that the close call in the Q crypt quite literally knocked some sense into Tracy. She was ready to give blue eyed demon Samira Adin (Ivy Natalia) the painting Edward Quartermaine (John Ingle) left her even though that turned out to be a Larry Ashton (Oliver Muirhead) scam.

Tracy’s trial for her life on General Hospital with “Saint” Sonny Corinthos (Maurice Benard) presiding shook her to her senses. Tracy watched while her father had a heart attack and wouldn’t help until he tore up the will he planned to cut her out of – and that was just the tip of Tracy’s sinful iceberg.

Now Tracy sees this as the last chance to live a good life but she doesn’t think she can do enough good in Port Charles so Tracy announces she’s going to take off to find her way out in the big wide world. That’s what leads Tracy to Luke Spencer (Anthony Geary). 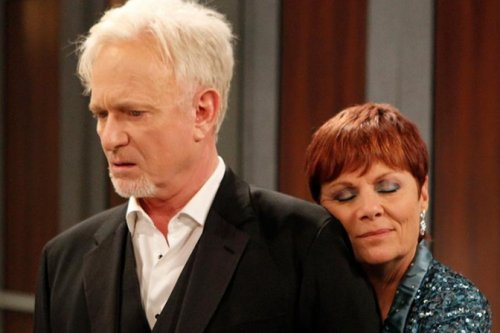 Luke figured prominently in Tracy’s flashback scenes at her day in court and General Hospital spoilers have teased for a while that Luke would return for Tracy’s exit – and so Anthony Geary is back, but only for the day. Geary will reprise the role of Luke on Thursday, May 4 for a single episode.

Tony Geary said when he left not to expect him to come back for a baby birth or a wedding – he added he’d only come back for something meaningful. The retirement from General Hospital of his good friend Jane Elliot is meaningful, for sure. So how do Luke and Tracy interact on their shared last day?

General Hospital spoilers indicate Tracy winds up in Amsterdam and runs into Luke at a café there and it’s kismet. Spanky Buns and Luke are together again! This is her chance to scrap her plans to be a martyr and run off with the man she never stopped loving which is a very “Tracy” thing to do.

We’ll get to see Tracy and Luke walk off in the sunset together hand in hand which is far more satisfying than Luke’s exit at the docks after nodding goodbye to Sonny.  Are you excited to see Tony Geary back as Luke on Thursday’s new GH episode? Share your comments below and come back to CDL for more General Hospital spoilers.