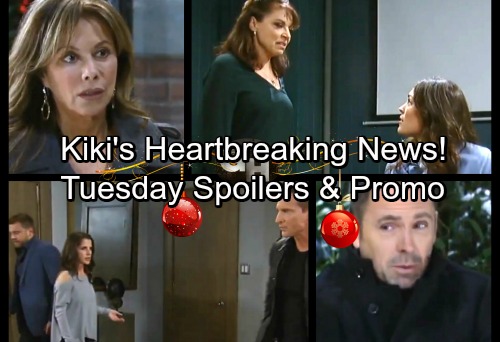 General Hospital (GH) spoilers for Tuesday, December 19, tease that Dr. Obrecht (Kathleen Gati) will give Britt (Kelly Thiebaud) a stern warning. She’ll insist that Britt had better not even think about betraying Faison (Anders Hove). Britt already spilled a good amount of info, but it seems she may know much more. Dr. Obrecht will do whatever she can to keep Britt’s mouth shut from now on.

Meanwhile, Jason (Steve Burton) and Sonny (Maurice Benard) will mull over the ornament dilemma. Someone swiped it from the donation box in the park and Jason doesn’t think it was random. He’ll work through some possibilities with Sonny in Tuesday’s GH episode. Jason may think the traitor got his hands on it in hopes of hiding crucial secrets.

Afterward, Jason will share everything he’s learned with Drew (Billy Miller). When Sam (Kelly Monaco) sees them together later, she’ll wonder what’s going on. The twins will admit that the mystery just got a little harder to solve. Nevertheless, they’ll commit to tracking down Drew’s memories and figuring out who the traitor is. 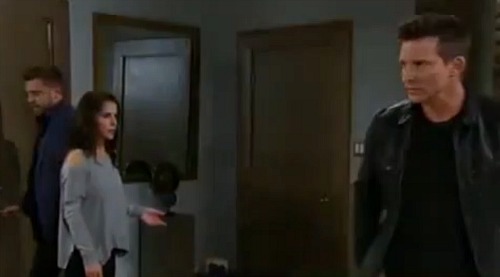 Other General Hospital spoilers say Kiki (Hayley Erin) will get some heartbreaking news. She’ll find out that Dillon (Robert Palmer Watkins) can’t come home for Christmas this year. Kiki will receive comfort from Griffin (Matt Cohen) as she prepares for a lonely, Dillon-less holiday.

At the gallery, Ava (Maura West) will express her gratitude to Jordan (Vinessa Antoine). She’ll insist that Jordan was a friend when she really needed one. Later, it looks like Griffin will offer Ava an apology. He may suggest that he’s sorry if his grudge against Julian (William deVry) put her in a tight spot.

Speaking of Julian, he’ll bump into Alexis (Nancy Lee Grahn) again on Tuesday. Julian will have some important updates to pass along. He’ll point out that he’s officially a free man, so that could make things a bit more complicated for Alexis. She’ll be glad Julian’s off the hook, but temptation could become a real problem in the coming months.

Elsewhere, Stella (Vernee Watson) will open up to Curtis (Donnell Turner). She’ll discuss a huge problem and Curtis will do what he can to assist her. General Hospital spoilers say Curtis will also help Jordan through her own crisis. Perhaps she’ll still be dealing with some Andre (Anthony Montgomery) issues. Jordan can’t seem to wrap her head around all the secrets she was in the dark on.

It sounds like GH has some awesome drama in store. We’ll keep you posted as other details emerge. Stay tuned to the ABC soap and don’t forget to check CDL often for the latest General Hospital spoilers, updates and news.