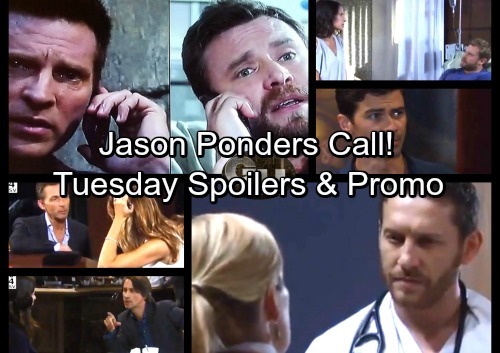 General Hospital (GH) spoilers for Tuesday, October 3, tease that Ava (Maura West) will resort to begging. Dr. Klein (Gene Farber) feels like Ava’s behavior violated their agreement, so that means the rest of her surgeries are out. Furthermore, Dr. Klein has no intention of letting Ava leave the clinic. It’s clear that major peril is ahead.

Nevertheless, Ava will be consumed by her beauty as usual. She’ll plead with Dr. Klein to fix her face, but he’ll indicate that she has bigger problems to worry about. The good news is Ava will make it out of this frightening ordeal. The bad news is she’ll have to suffer in the meantime.

Other General Hospital spoilers say Jason (Billy Miller) will try to make sense of the strange call he received. Patient Six (Steve Burton) just made contact with Jason, but it looks like they’ll get disconnected. Perhaps Patient Six will have to cut it short when his angry pursuers arrive.

GH spoilers state that Griffin (Matt Cohen) will speak with some menacing men in Tuesday’s episode. He’ll let them know that he saw someone who matches their description. Griffin might be manipulated into thinking Patient Six is a danger to himself and others.

However, part of Griffin may feel like he should protect Patient Six. He could probably tell that Burton’s character is tired and desperate. Back in Port Charles, Sam (Kelly Monaco) will have something important to discuss with Jason. They’ll work through any lingering issues and make more plans for the future.

Of course, Patient Six’s arrival will shake things up down the road. Jason and Sam will just have to find a way to deal with it. Until then, we can watch Valentin (James Patrick Stuart) and Nina’s (Michelle Stafford) celebration. General Hospital spoilers say Valentin will give his wife a special anniversary gift. He’ll want her to understand just how much she means to him.

Valentin will be called away on a secret trip later this week, so it’s great that he’s squeezing in some romance before he goes. In Monaco, Anna (Finola Hughes) will tell Finn (Michael Easton) why it’s so important to expose Valentin’s crimes. She’ll feel personally responsible for the man Valentin has become.

After she elaborates on their tricky history, Finn will likely suggest that Anna has it all wrong. He won’t think she’s to blame for Valentin’s heinous actions over the years. After all, plenty of people have been able to rise above troubled pasts. Valentin has made his own choices and he may have to suffer for them eventually.

It looks like an exciting episode is coming up. We’ll give you updates as other GH details emerge. Stick with the ABC soap and don’t forget to check CDL often for the latest General Hospital spoilers, updates and news.