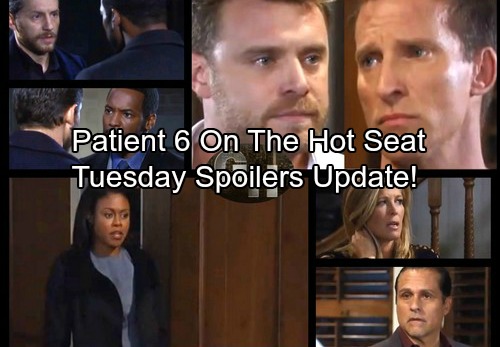 General Hospital (GH) spoilers for Tuesday, October 31, tease that Finn (Michael Easton) will want to have a serious conversation with Anna (Finola Hughes). He’s been carrying on a romantic charade for Cassandra’s (Jessica Tuck) sake, but he feels like enough is enough. Finn will argue that it’s time for all this to be over. Their takedown scheme hasn’t worked yet, so he’ll suggest throwing in the towel.

Anna will probably contend that they just have to give it a little longer. She’ll urge Finn to keep the lie going and help her pull this off. Of course, Anna and Finn seem to be growing much closer. Perhaps a real relationship could emerge from their sham.

Speaking of relationships, it sounds like Kevin (Jon Lindstrom) and Laura (Genie Francis) are ready to move theirs forward. After Kevin’s beautiful proposal, Laura will hint that she’s prepared for whatever comes their way. Kevin and Laura are one of GH’s most solid couples, so they might as well tie the knot.

Meanwhile, Dante (Dominic Zamprogna) will ask Nina (Michelle Stafford) and Valentin (James Patrick Stuart) a few questions. He’ll wonder if they know anything about what went down tonight. Nina won’t have more info than any other partygoer. If Valentin happens to be keeping any secrets, you can bet he’s not revealing those either. It appears Dante will just have to look elsewhere for answers.

Other General Hospital spoilers say Andre (Anthony Montgomery) will have an intense faceoff with Dr. Klein (Gene Farber). He’ll warn that he needs to make other arrangements if he’s been compromised. Dr. Klein will insist that they can get a grip on this, but Andre will believe their plan is falling apart.

Across town, Jason (Billy Miller) will stare Patient Six (Steve Burton) in the eyes and try to figure out what’s going on. Naturally, Jordan (Vinessa Antoine) will want to know the same thing. She’ll hope to get to the bottom of the Jason dilemma, but it’s going to be a while before anyone gets the whole story.

Jason will probably rush off to the hospital with Sam (Kelly Monaco), but Patient Six stay behind to chat with Carly (Laura Wright). She’ll want a chance to talk to Patient Six and determine if she’s on Sonny’s (Maurice Benard) side. It won’t take long to convince Carly that Burton’s character is truly Jason.