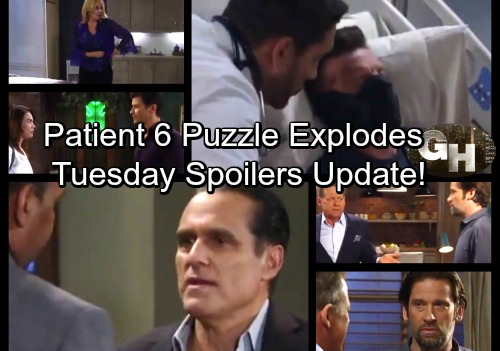 Liz might suggest that physically assaulting Valentin is a bit much, but she’ll probably think Griffin’s heart is in the right place. GH spoilers say Liz will just want Griffin to be careful. Valentin is dangerous and crossing him is never a good idea.

Elsewhere, Maxie (Kirsten Storms) will ask why Nathan (Ryan Paevey) doesn’t want to make love to her. Nathan will look glum as he declares that life as they know it is over. He’ll feel certain that everything’s going to fall apart once his identity is revealed.

Maxie will promise Nathan that his Man Landers’ ruse will have a happy ending. She’ll think they can keep the secret and satisfy the publisher at the upcoming party. Unfortunately, Maxie’s grand plan won’t be enough to hide Nathan and Amy’s (Risa Dorken) scheme.

Meanwhile, Sonny (Maurice Benard) will try to figure out who would be calling him from St. Petersburg. It appears he may recruit Brick (Stephen A. Smith) to trace the call and report back. Sonny will have a weird feeling about this bizarre call. He’ll hope to discover the caller ASAP.

Other General Hospital spoilers say Ava will believe she’s in deep trouble. She won’t understand what’s up with the strange staff members and crazy Patient Six (Steve Burton). Ava definitely wasn’t expecting violent showdowns at this place. She would’ve preferred a calm resort experience, but that’s obviously out of the question.

In Patient Six’s current room, Dr. Klein will stand by his bedside. Steve Burton’s GH character is keeping many secrets, even from the docs. Dr. Klein will wonder who Sonny is to Patient Six. He’ll fear that Sonny might come looking for a familiar face sooner or later.

Back in Port Charles, Franco (Roger Howarth) will let Scott (Kin Shriner) in on a secret. Betsy (Deborah Strang) wanted to keep all the drama under wraps, but Franco is anxious to tell someone anyway. He’ll decide he can trust Scott with the truth about Jason’s twin, Drew.

Once Scott hears the whole story, he’ll ask what happened to the other brother. Scott will seem just as stunned as Franco was by the revelation. General Hospital spoilers say Franco will admit that Drew supposedly died.

However, Franco may have some doubts based on Betsy’s reaction to his questions. Those doubts will grow after the Patient Six chaos eventually hits town. We’ll give you updates as other GH news comes in. Stay tuned to the ABC soap and don’t forget to check CDL often for the latest General Hospital spoilers, updates and news.