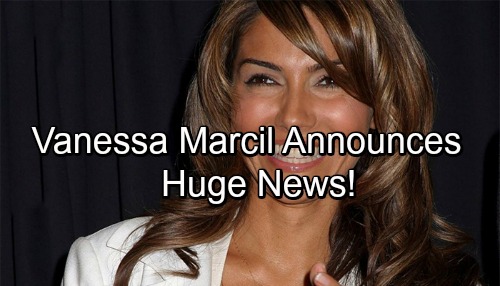 General Hospital (GH) spoilers tease that Vanessa Marcil (ex-Brenda Barrett) has a big announcement to make. Of course, viewers have learned to be patient when it comes to revelations from their favorite stars. Marcil will be keeping her fans in suspense a little longer, but we’re all anxious to hear what she has to say.

In an Instagram post, Marcil revealed that her news would be coming within the next two weeks. She offered another hint by posting an old-school picture. This classic look was reminiscent of her days as Brenda on GH, so that’s definitely intriguing. General Hospital spoilers hint that some huge surprises are coming up on the ABC soap this fall. Could Brenda’s return be one of them?

Steve Burton (ex-Jason Morgan) has already made his comeback and GH is having success with that in the ratings. Although she won’t be back as Carly (Laura Wright), Tamara Braun also reportedly has a deal in the works. It’s clear that General Hospital is interested in bringing familiar faces back on board. Fans tend to like a blend of history and current storylines, so that’s a great way to achieve that balance.

Brenda’s return could really shake things up in Port Charles. When Oscar (Garren Stitt) first debuted, some GH watchers speculated that Brenda might even be his mother. We still haven’t seen a glimpse of Oscar’s mom and now the identity of his father is becoming the buzzworthy issue. There’s a lot to explore when it comes to this mysterious teen’s background.

Brenda could certainly cause some problems for Sonny (Maurice Benard) and Carly. General Hospital always finds a way to toss more drama at “CarSon,” so there are undoubtedly other obstacles ahead. Could Sonny’s ex cause another bump in the road? Time will tell, but Marcil’s announcement could offer some clues in advance.

What do you think about Vanessa Marcil’s upcoming news? Would you like to see Brenda Barrett back in Port Charles? What kind of storyline would you want for Brenda? We’ll give you updates as other details emerge. Stay tuned to the ABC soap and don’t forget to check CDL often for the latest General Hospital spoilers, updates and news.