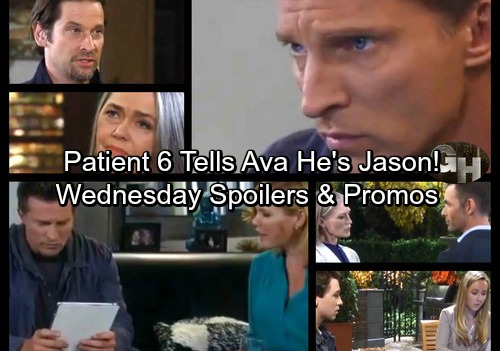 General Hospital (GH) spoilers for Wednesday, October 18, tease that Franco (Roger Howarth) will meet back up with Betsy (Deborah Strang) to ask one crucial question. He’ll just want to know if Andrew is still alive. Betsy will look concerned by Franco’s curiosity. She might be worried that Franco’s going to drive himself crazy with this.

Of course, it’s also possible that Betsy’s hiding something. Drew’s death could’ve been faked without Betsy’s knowledge or she could’ve been threatened to keep quiet. GH has plenty of options here. While Franco interrogates Betsy, Patient Six (Steve Burton) will do the same over at Ava’s (Maura West) place. He’ll want to hear everything she can tell him about Jason Morgan’s (Billy Miller) life.

General Hospital spoilers say Ava will eventually get suspicious. She’ll wonder why Patient Six is so interested in Jason, but he may not want to fill her in on his claims at first. Patient Six must realize that he’s going to seem insane.

Nevertheless, Ava will wear Patient Six down sooner or later. He’ll admit that he’s actually Jason – or at least he thinks he is. Burton’s Jason needs help to prove it, so Ava will agree to look into this for him. 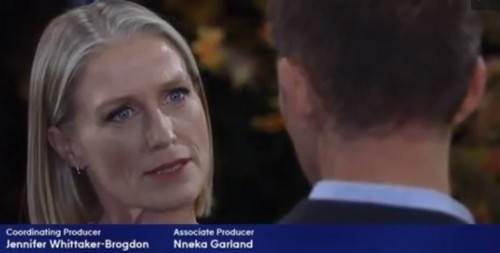 Across town, Carly (Laura Wright) will want to take action. She’ll bring up a problem to Sonny (Maurice Benard) and suggest that now she has to do something about it. Does this involve Nelle (Chloe Lanier) or possibly Oscar (Garren Stitt)? Carly still hasn’t met Oscar’s mom yet, so she may want to arrange a meeting soon.

Meanwhile, Josslyn (Eden McCoy) will have Oscar’s father on her mind instead. Her Internet search will hit a snag, but she won’t give up. Josslyn will promise Oscar that they can find info on his dad, but he’ll seem pretty nervous about all of this.

Other General Hospital spoilers say Anna (Finola Hughes) will get on Finn’s (Michael Easton) last nerve. When Felicia (Kristen Wagner) assumes they’re dating, it looks like Anna will play along. Finn won’t approve, but Anna will want to keep up the charade for Cassandra’s (Jessica Tuck) sake.

Speaking of Cassandra, she’ll tell Valentin (James Patrick Stuart) that she wants to be partners – in business and in bed! Valentin probably is interested in either angle, but Cassandra might talk him into working with her on the business side of things. At Crimson, Nina (Michelle Stafford) will blow her top! She’ll shout that Jason would be a fool to fire her.

It sounds like Nina’s job is truly in jeopardy. Can they work out some sort of agreement? We’ll give you updates as other GH news comes in. Stay tuned to the ABC soap and don’t forget to check CDL often for the latest General Hospital spoilers, updates and news.