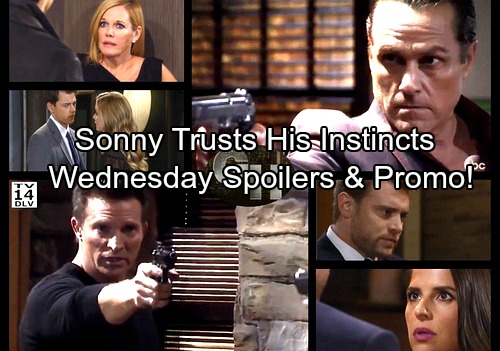 General Hospital (GH) spoilers for Wednesday, October 25, tease that Sonny (Maurice Benard) will demand to know who he’s looking at. He’s stuck in a faceoff with Patient Six (Steve Burton) and he can barely believe his eyes. Patient Six will insist that he’s Jason, but it’s going to take some work to convince Sonny. He may offer more facts that he thinks only the real Jason could provide. Still, GH spoilers tell us that Sonny will trust his instincts when it comes to Patient Six… so we all know what that means!

Meanwhile, current Jason (Billy Miller) and Sam (Kelly Monaco) will get all dressed up for the launch party. General Hospital spoilers say Sam will have some concerns just before they head out the door. She’ll ask if Jason thinks they might be asking for trouble.

Since they’re being monitored, Sam may suggest they should’ve kept a low profile. She might have a bad feeling about this celebration. Jason will reassure Sam, but danger is indeed on the way. The party guests will face a serious threat soon enough.

Elsewhere, Nelle (Chloe Lanier) will also feel threatened. It appears Michael (Chad Duell) will reveal that Curtis (Donnell Turner) delivered another secret. Nelle spent nearly a year in a mental institution, but she can probably come up with a decent explanation.

Nelle’s kidney was ripped out and sold. Her parents and close friend from high school died. Nelle was later accused of murdering her fiancé. A breakdown wouldn’t be unreasonable after everything she’s been through. There’s no shame in seeking help and Nelle seems stable now. She’s a manipulative liar, but she’s not insane.

Whatever the case, Nelle will rage over lack of trust. She’ll argue that Michael’s got to stop digging into her past. Is there really more?! GH is venturing into ridiculous territory, but we’ll go along for the ride.

Other General Hospital spoilers say Amy (Risa Dorken) will have a chat with Nathan (Ryan Paevey). She’ll wonder how Maxie (Kirsten Storms) took the news that Nathan retired as Man Landers. Nathan was supposed to give Maxie updates, but it looks like there was a change of plans. 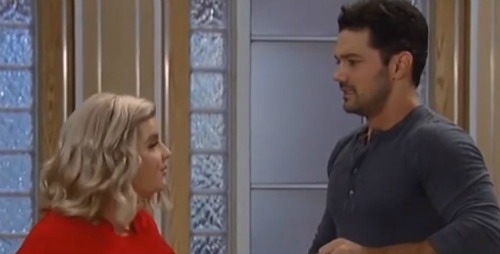 Maxie might’ve convinced Nathan to keep up the good work since she now has a scheme in play. In the sauna, Maxie will pitch an idea to Nina (Michelle Stafford). Once she’s done, she’ll ask if Nina’s going to make her an offer or what. Maxie will hope that her proposal is just too tempting to pass up.

Across town, Griffin (Matt Cohen) will notice Ava (Maura West) doesn’t seem like herself. He’ll wonder if she’s changed her mind about having dinner with him. Will Ava reschedule so she can dig around a bit? She saw Franco’s (Roger Howarth) sketch of the old Jason, so she’s obviously curious!

It sounds like some great GH scenes are ahead. We’ll keep you posted as other details emerge. Stay tuned to the ABC soap and don’t forget to check CDL often for the latest General Hospital spoilers, updates and news.