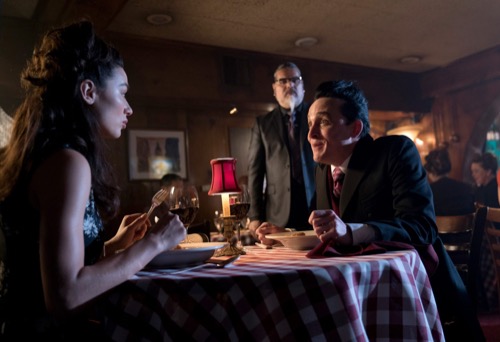 Tonight on FOX Gotham continues with an all new Thursday, October 19, 2017, called, “A Dark Knight: The Blade’s Path” and we have your Gotham recap below for you. On tonight’s episode as per the FOX synopsis, “Nygma comes face-to-face with Butch Gilzean, but he is not who he used to be. In an attempt to regain power and identity, Nygma decides to put his former partner’s skills to the test. Meanwhile, Sofia Falcone takes action to protect her own life by appealing to Penguin’s vulnerable side. With the power of the dagger in his possession, Bruce surprises those around him with his bold actions.”

The orderlies dump Butch in the swamp in the middle of the night. They laugh sinisterly before driving off. Meanwhile, Gordon comes in to see Harvey. He wants to know about the case against Ra’s al Ghul. Harvey

Alfred comes in to see Bruce. He is holding the dagger. He hasn’t slept. He is worried about Ra’s al Ghul. He thinks Ra’s al Ghul wants the knife before someone can fulfill the prophecy. Alfred reminds Bruce he needs to watch the path he is on and the vow he made to not kill. Alfred takes the dagger and locks it away in the draw in the study.

Bruce is at the wake of the boy. Alfred dismisses himself to speak with Gordon who has arrived. Gordon tells him that Ra’s al Ghul is in the midst of being indicted. He warns Alfred to keep Bruce away and protect him. Bruce is listening in to their conversation. When he gets home he takes the dagger from the draw.

Barbara visits Ra’s al Ghul in his glass cell. He passes some type of power to her through the glass before telling her she must go.

Butch bubbles up to the surface. He comes out of the water appearing all white with dark eyes. He wanders to a nearby camp of men singing by the firelight. He grunts at them when they ask him where he came from. He throws one of them into a trailer and finishes off the rest. He takes their clothes and takes off.

Oswald is angry over a conversation he is having with his assistant. Firefly comes in. She has a plan to send his criminals back under his umbrella. They should have lunch. They will be seen together and everyone will know he has the Falcone family’s support. He agrees.

Bruce scales the side of the prison. He gets in and past the guards. He enters Ra’s al Ghul’s cell and pulls the dagger out behind the back of Ra’s al Ghul who is asleep on his cot. He sheathes the knife. Ra’s al Ghul wakes and calls him weak. He holds Bruce up choking him. The guards come in. They refer to Ra’s al Ghul as their master when Bruce demands they take Ra’s al Ghul away. Ra’s al Ghul tells them to take Bruce below. He’s dragged away.

Gordon and Alfred arrive at the prison. Their weapons are taken from them after they request a look around.

Sofia goes to visit an old friend, a restaurant owner. She asks him how he is faring under Oswald’s new rules. He doesn’t want to say. Sofia tells him that she plans to eat there with Oswald and she wants to make it a lunch he will never forget.

Ra’s al Ghul meets Bruce below. He thinks Bruce is his heir and he wants Bruce to kill him. He wants to be set free.

The Riddler wants to leave but Butch won’t let him. The men from the fire come out of nowhere. They want to kill Butch. He takes them out once again, except for one man who sets him on fire. The Riddler puts the fire out.

Oswald arrives at lunch. They are served their meals. Oswald makes his bodyguard take a bite first to ensure he isn’t being poisoned. He eats a bit himself and declares he is full. Sofia insists he stay and try the goulash. He tries some and suddenly becomes misty-eyed. He rushes off. Sofia fed him his mother’s recipe.

Alfred and Gordon manage to take out the guards. Meanwhile, Oswald wants to be alone but Sofia shows up. He asks her what she is trying to pull. What does she want? She just wants to help him, she tells him. He hobbles off. He sits. Sofia comes to look at his foot. He lets her. He softens a bit and talks about his mother.

Alfred tells Bruce that he may not feel worthy now but he can be the hero Gotham needs of he gets back on the right path.

The Riddler brings Butch to an underground fight club. They need to make some money he tells him.