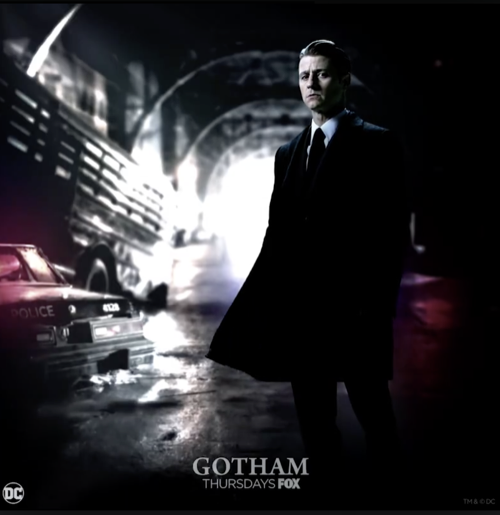 Tonight on FOX Gotham continues with an all new Thursday, October 5, 2017, called, “A Dark Knight: They Who Hide Behind Masks” and we have your Gotham recap below for you. On tonight’s episode as per the FOX synopsis, “Gordon takes matters into his own hands when he travels to Miami in attempts to persuade Carmine Falcone for his help in the fight against Penguin. There, he meets Carmine’s daughter, Sofia, who unexpectedly follows Gordon back to Gotham. The battle for Penguin’s prized weaponry continues during auction night at the Iceberg Lounge and Bruce’s presence puts him on Penguin’s radar.”

The ladies of Gotham were tired of being overlooked. They were treated like side-kicks and often found their opinions ignored. But Barbara claimed she wanted to change all that. She came back to town with enough money to set up a gunrunning business and she wasn’t telling anyone who else was in on it. So Barbara was more or less asking the ladies of Gotham to trust her because she needed their input to truly get business off the ground though Selina and Tabitha hadn’t wanted Poison Ivy in on it as well.

Tabitha had accused Ivy of merely being a scrooge for Penguin and so she told the other woman to stay away. But Ivy couldn’t take being dismissed. She had already suffered from it one too many times from Penguin and therefore felt the need to prove herself. Ivy broke into a potion’s shop and she took everything she could find from behind the counter. So Ivy was taking risks right as Selina was quite suspiciously following all of Penguin’s shipments which was something she ended up sharing with Bruce no less.

Bruce had gotten a new suit from Lucius Fox and now he no longer felt the need to slow down or think things through because he believed his suit would protect him. But Alfred continued to try and reign him in. He reminds Bruce to think ahead before he got hauled in by the police again and tries to tell him to take it easy though Bruce still ignores him more than listens. So he had gotten injured while he was spying on Penguin’s men and Alfred had been forced to stitch him up again. Meanwhile Selina had gotten into some trouble with Barbara.

Selina’s job had been to grab a package from Penguin and she had overlooked it because Bruce and his shenanigans had gotten in the way. But Barbara had said that she shouldn’t have left the shipment up to Selina and that the younger girl needed to take baby steps before she could be in charge of anything important. So Barbara had told Selina she could mop around the shop and Selina had laughed in her face. The street kid wasn’t going to take anyone’s abuse and she would rather walk away than mop!
But while everyone was so concerned about what was being shipped in, someone snuck into Penguin’s club and unfroze Enigma. So Enigma later woke up in the apartment of a crazed fan who had apparently gone to elementary school with him. She said her name was Myrtle Jenkins and that she had been following his career as a villain from the very beginning however Myrtle had also informed Enigma about what happened to him. She told him all about how he had been frozen and even put on display by Penguin.

Enigma remembered Penguin and Penguin’s obsession with him. But he had truly gotten angry when he found out he had been frozen in ice for the last five months. So Enigma wanted revenge and Penguin had wanted the person that freed Enigma dead, but Penguin also had another problem on his hands because he found out Barbara had been behind the attempted burglary. He couldn’t prove it though he knew it was Barbara from the moment she walked into his office and tried to buy an artifact off of him.

That same artifact had been part of the shipment and it was just one among many things Penguin hoped to auction off to Gotham’s elite. But Barbara hadn’t wanted to wait until the auction. She had wanted to buy thing before anyone else could get to it or possible outbid her and so Penguin summarized her mystery benefactor was the one that truly wanted the artifact. So he tried to ask Barbara about it and she hadn’t told him anything. She refused to mention who helped her start her business and that just made Penguin even more curious.

Penguin knew Barbara’s benefactor needed deep pockets. But that she couldn’t be supported by anyone he knew. The people he knew would have showed their hand by then. So it wasn’t someone like Falcone. Falcone was living out his retirement in Miami and he wasn’t walking away from it for anyone. Gordon had gone down there to see if Falcone would take on the Penguin and he had gotten turn down because Falcone was dying and wanted to spend the days he had left with his daughter Sofia.

Sofia was something of a secret because not many people knew about her and therefore she was allowed a somewhat normal upbringing. But Sofia had wanted to go to Gotham after she heard the pitch Gordon tried to sell Falcone on. So she had been disappointed her father wasn’t going and interested in Gordon because he could tell her what the city was like. And the fact Sofia had grown up sheltered meant she was interested in breaking the rules. She had hung out the rest of the day with Gordon and ultimately got him to relax by going into the water with her.

So Sofia was interested in Gordon. She talked about her childhood and her brother, but she didn’t hold what happened to her brother against Gordon. But Gordon’s break from Gotham didn’t mean Gotham got any better in his absence. Bruce for one had kept digging and he found out Penguin was shipping in a rare dagger that just so happened to be connected to Ra’s al Ghul despite the knife being more than two thousand years old. And so Bruce went to Penguin’s auction to buy the knife and ended up making an enemy out of Barbara.
Barbara had tried to outbid Bruce for the dagger and Penguin had stopped her because he wanted to watch Barbara lose. But Penguin later warned Bruce that Barbara didn’t like letting things go and that she might come after him because of what happened. So Bruce pretended to take that warning in stride yet he too wanted to know why Barbara had wanted that knife and where she had gotten the money. Except Bruce hadn’t expected Selina would show up for the knife or that the two would get into a fight over it.

Bruce hadn’t wanted to just hand over the knife and he didn’t care what that meant for Selina. So the two parted angry at each other because Bruce didn’t think Selina knew the real reason she had to steal the knife however Bruce was going to find out because Ra’s al Ghul was back in town. He had apparently trained Barbara and had been the one supporting her from behind the scenes. But now Ra’s was disappointed. He had expected Barbara to get it and she in turn had expected Selina to get it. And so Bruce now had something Ra’s wanted very much.

Also, Gordon came back to town. He came back relaxed and carefree though that all changed when he came across Sofia. Sofia had traveled to Gotham as well and she planned on controlling the city like a Falcone. But Gordon hadn’t liked being used and he told Sofia that wasn’t going to work with her no matter what she thought so he turned her down. Gordon thought Sofia was always going to come to Gotham and so he didn’t see the need to help her, but Sofia was going to do what she wanted and there was nothing Gordon could do to stop her. So his little trip to Miami hadn’t gone well.

And while the city is being filled with even more baddies – Enigma at least has lost his touch and now couldn’t solve a riddle to save his life.