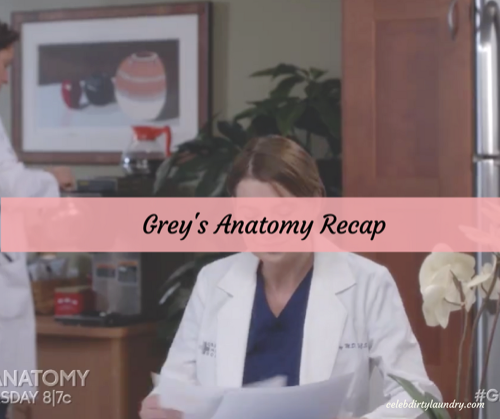 Mere politics have left the hospital divided. There were those that believed in the Minnick Method and were finally coming around to the idea that Minnick was revitalizing the resident program however there were also a few holdouts. But Meredith’s return to the hospital had changed things. She had come back to work after getting Richard’s consent and so she thought that everyone would be fine it seeing as she was still on Richard’s side. So it had been a surprise when Jackson had accused her of undermining her coup.

Jackson had said that they had been in a stronger position as long as Meredith held out. However, Meredith’s position had been filled quite nicely by April and April had in fact did the things that Meredith let fall by the wayside. So the hospital had been more organized with Meredith gone and April more than anyone knew that yet Meredith and Jackson still thought that April stole Meredith’s job when she was away and that she couldn’t possibly live up to the great Meredith grey’s legacy. And so April was left feeling underappreciated.

April knew that she had done a great job and that she might have been an even greater administrator than Meredith. Yet, the only one that truly acknowledged that had been Catherine. Catherine and April have really bonded lately because they both understood that what was best for the hospital wasn’t always what was best for their friends. So the two women had started to talk about options. Catherine had said that the Avery Foundation had connections to hospitals and trauma clinics all over the world and she thought that April might being interested in one

Catherine had thought that April would be great at the Avery Trauma Clinic in Chicago and so she invited April to Chicago with her, but what made the trip seem so appealing had been the way that Jackson was treating them both. Though Jackson might have gone a little too far with how he was defending Richard because he had given his mother an ultimatum. He told her to change her decision about Minnick or he was going to use his voice as a representative of the Avery Foundation to get Minnick fired. And, well, both Catherine and April had thought he was being foolish.

They saw the Minnick Program was working and he even saw it when a case demanded his attention along with Richard’s, April’s, and Catherine’s because they all had to work on a man badly burnt by a turkey deep fry fire with Ben. But Ben was the most reasonable one out of the lot. He told them to stop fighting and had helped them figure out how to best treat the patient who already had enough problems without adding feuding doctors. So Ben really came into his own for the surgery and he employed a lot of what Minnick had taught him.

Ben had been proactive when he figured out treatment and he went ahead with operating on the patient with Richard just giving him tips in the background. However, Jackson had gotten angry about that. He thought that Richard was giving in to Minnick by letting her program being the one that dominated the OR. So Jackson got into a heated argument with Richard because he thought that he was giving in to Catherine and so he said Catherine shouldn’t win yet Richard had thought that Jackson was getting a little carried away.

Richard had said that maybe the others did have a point and therefore he couldn’t understand why Jackson was so willing to fight when he was finally ready to compromise. Yet, Jackson’s anger appeared to be directed at Catherine. He said Catherine was going to keep on forcing her way if they gave her an inch and that his mother would never stop. So finally Richard told Jackson to calm down because he didn’t want to cause a rift between Jackson and his mother and, frankly, he had more faith in his marriage than Jackson did.

Jackson seemed to believe that Catherine had hurt the one she loved and that she should be the one to apologize. Though Richard informed Jackson that he and Catherine first got together because they had been arguing about the hospital and so he didn’t think their current argument was going to be the end of their marriage, but Jackson still wouldn’t let it go even as he listened to reason. He thought he was in the right and he was prepared to argue with his mother as long as possible. So Catherine later talked to Jackson and she had asked him what was wrong.

But Jackson revealed another thing that had been upsetting him. He accused his mother of finally getting the Avery she always wanted with April and that she was merely manipulating April to hurt him. So both Catherine and April had tried to talk about the matter with him and they each tried to say that no one was playing any games. April was interested in furthering her career and Catherine had enough faith in her that she wanted to assist in any way she could however Jackson refused to believe either of them and he continued fighting Richard’s case while everyone else was moving on.

Meredith had gotten embroiled in an argument between Riggs and Alex with both men vouching for different treatments for a baby boy that needed a new heart. However, Riggs had gone behind Alex’s back to get the baby on the transplant list and DeLuca had assisted him. So Alex had later been angry that the men overrode his decision as well as that of the parents’ yet Alex filing a formal complaint and venting off some steam to Meredith meant she had become involved. And so she essentially chose him over Riggs.

Meredith told Riggs that if he ever wanted a chance with her that he had to be nice to Alex and less of a jerk. Yet, Riggs had told her that he was interested in her and he asked her to tell him how she feels once she sure. So he put everything out there and hopefully Meredith will gain the courage to answer him properly though by this point no one was thinking about Richard or his living situation. Richard has been staying in the on call room and so he was practically living at the hospital. And he also had some pointers for Bailey.

Richard had asked for newer beds because the old ones have grown too lumpy, but Bailey and Catherine thought he should return home to his own. Though Richard didn’t want to do that and he was thinking about staying with Arizona when he realized that she had moved on too. He had found her making out with Minnick and he had realized that the two have been seeing each other behind everyone’s back. So right now Richard feels like what he’s fighting for has become irrelevant and the only one that doesn’t see that is Jackson.

So Jackson was fighting a loss cause and the one couple that hadn’t become embroiled with everything that’s happening (Amelia and Owen) are off fighting/nonfighting over nonsense!