Grey’s Anatomy LIVE Recap: Season 13 Episode 14 “Back Where You Belong” 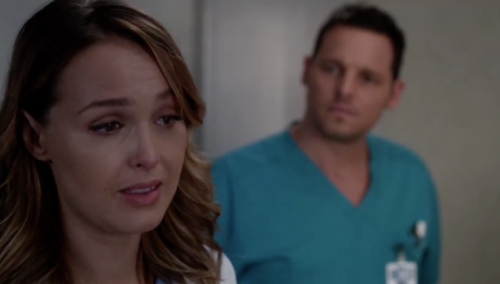 Meredith hated being at home. She was someone that craved the busyness if not craziness of the hospital because she was also someone that counted surgery as her due. Meredith was brilliant at what she did however she was arrogant and often thought that things would go her way. But she had done some research into what she could do about her suspension and it turns out that the checks and balances that had been put in place when she bought the hospital with the others meant she couldn’t just demand her job back. So Meredith ultimately had to ride out her suspension or change her demeanour.

Meredith had gotten suspended because she thought that she could override what the Chief said. However, Bailey had put Meredith in her place when she suspended her and having April fill in for Meredith had more or less been a threat. Straighten or ship out! So Meredith was stuck at home because of her pride and she had no one to blame other than herself for having her days be commandeered by her children’s laundry though Bailey had a soft spot for Meredith and she had hoped that she could make Meredith see the light. And so Bailey left April in charge while she went to “Camp David”.

“Camp David” was the code word for Meredith’s house yet April hadn’t known that and so April hadn’t known if she should contact Bailey when a complication arose. Though the problem was serious. A mother had agreed to give her son a kidney after they had run out of options and he couldn’t take being on dialysis anymore. So everything had been fine until the poor woman’s blood pressure spiked during surgery and she ended up losing her other kidney. And therefore the doctors didn’t know what to do next. The kidney had already been taken out and technically the mother had signed off on it in order for her son to have it.

Yet, the mother was going to need dialysis herself because her other kidney was shot and so the doctors didn’t know who they were supposed to prioritise. The mother and son both needed that kidney, but the doctors had checked and there wasn’t any other kidney available to them. So the doctors where stuck about on who would get the kidney when suddenly they got an offer they were suspecting. The father had come out of nowhere to offer his kidney and that had also proven to be a problem because he had been cut out of his wife and son’s lives. He was apparently abusive and they had left after he had hit son for the first time.

So Jo more than anyone else was against taking the father’s kidney. She said that the mother would hate to find out that her husband had forced his way back into their lives and had found a way to control them. But Jo had been overruled. The father was a viable option and they had to at least check his kidney because that would allow them to save both the mother and son however Jo had hated it and she had hated the fact that the father had been a match so she had a few words with him before his surgery. Jo told him that he doesn’t get to be the hero and worm his way back into his family’s lives.

Jo had wanted to tell him that because she needed him to know the reality of the situation and that hitting his wife and son meant they were never going to forgive him or want him around. However, the father had told Jo that he knew he could never make up for what he did and that he had just wanted to help. So the surgery did go ahead and everyone involved admittedly felt bad about that decision though they knew what they were doing, by keeping everyone alive, was the right thing to do and Baily actually came back right as the kidney was being transferred. And she had been proud of the residents.

Bailey had seen for herself that Minnick’s method does work and that it instilled the residents with a whole new level of confidence. So she had pointed that out to Richard and she also mentioned that she had seen Meredith yet she said that Meredith wasn’t coming back and that it was Richard’s fault. Bailey had told Richard that Meredith had ultimately chose him and that’s why she didn’t have her job. Though Richard didn’t want to be the person that was holding Meredith back and so he had later talked to her. He told her that she shouldn’t let her loyalty to him get in the way and that she should go get her job back.

So Meredith had taken what he said and she had called Bailey, but Meredith’s time away had affected April and Jackson’s relationship. Jackson thought that April was a traitor for supporting Bailey on hiring Minnick and he called her a traitor. Yet, living together was turning out to be a problem for the both of them and so that arrangement might just come to an end soon because April didn’t feel bad about what she didn’t nor should she have to. April saw the same thing as Bailey and that Minnick’s take was inspiring. And so the only relationship seems to be flourishing since Minnick took over was Minnick’s own flirtation with Arizona.

The two women were secret friends and they had a thing for each other. So, tonight, they kissed and no one told Chris Daniels’s mother that her ex-husband had donated his kidney to save Chris’s life. But when Maggie and Nathan had helped parents reunite with the daughter they thought had died though she had in fact been schizophrenic and had been wondering the streets – Maggie finally understood what happened to him when his wife’s helicopter went missing. Maggie had seen that he had wanted a happy ending of his own and that he never got it. And so Maggie later told Meredith that she believes Meredith gets Nathan.