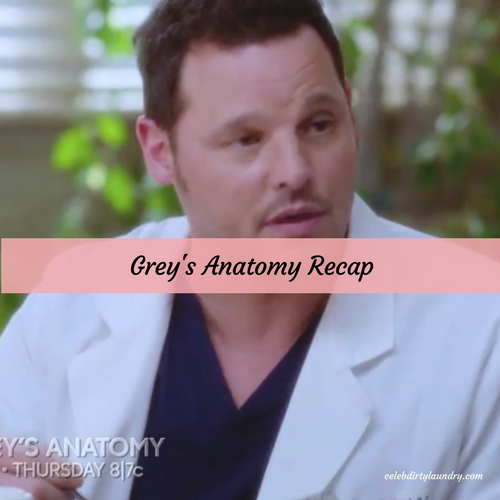 Meredith and Alex talk as they drive to the hospital. She needs his advice on how to tell Maggie about her relationship with Nathan. A large group gathers to hear the interview with Meredith and Nathan about their rescue on the plane. Miranda notices that Catherine and Richard aren’t sitting together and wants to go ask why but her husband stops hers.

Alex checks in his cancer patient, Veronica, who is 34 weeks pregnant. As April is checking a patient in the ER with horrible stomach pain the patient throws up on her and her hair. As April is rinsing her hair out she finds a worm. The woman’s stomach is full of large living worms. As Meredith and Nathan answer questions from the press Maggie notices Nathan rub Meredith’s arm.

As Maggie scrubs into a surgery, Meredith calls her but she ignores her call. The doctors tell Veronica that her cancer has spread to her spine and she only has 2 – 3 more months to live. They want to deliver the baby today. The team books an OR to perform surgery on the woman with the worms. Miranda asks April to talk to Richard to help get he and Catherine back together. Meredith tries to talk to Maggie about Nathan but Maggie doesn’t want to hear it. The woman with the worms boyfriend gets very freaked out about the worms and makes an excuse to leave the hospital room. It seems he has left the hospital.

Miranda talks to Catherine about Richard because she feels responsible for the problems they are having but Catherine doesn’t want to talk about it. Word of the surgery to remove the worms spread and several hospital staff show up to watch the operation. There is a huge number of worms. Alex and Meredith have lunch and Maggie joins them. Maggie says several nasty things and then leaves.

Veronica’s baby is born and is healthy. Maggie takes an OR that Meredith had reserved and they have words. Maggie wants to know when it all started. Meredith and Nathan got together before she knew Maggie liked Nathan. Maggie is most upset that she was lied to. Meredith was all she had left since her mother died. Veronica develops a blood clot that goes to her lung and she dies on the operating table.

Richard and Catherine pass each other in the hall but don’t speak. The worm patient’s boyfriend returns and is apologetic. Miranda again talks to Catherine about her relationship with Richard. She talks to her about her past mistakes and Catherine seems to listen. Catherine goes to Richard and tells him she was wrong. They bond of his pictures of the worms. Amelia sobs over the death of Veronica and Owen comforts her. Meredith reaches out to Maggie and she says she is still mad but they go out together.