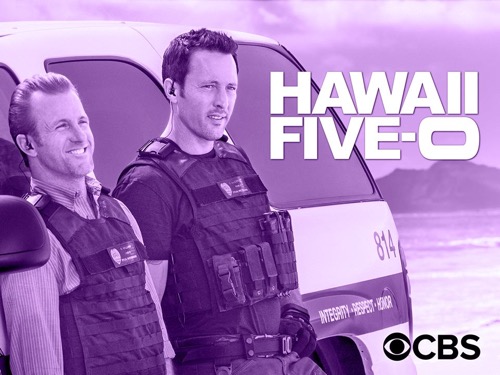 Tonight on CBS Hawaii Five-0 air with an all-new Friday, October 20, 2017, episode and we have your Hawaii Five-0 recap below.  On tonight’s Hawaii Five-0 season 8 episode 4 “E Uhi Wale No ‘A’Ole E Nalo, He Imu Puhi (No Matter How Much One Covers a Steaming Imu, the Smoke Will Rise)” as per the CBS synopsis, “The lives of Five-0’s informants are put in danger when the HPD system is hacked and one ends up dead, forcing McGarrett to enlist the help of hacker Aaron Wright, who he just imprisoned.”

Tonight begins at the HPD Academy Shooting Range, where Steve McGarrett (Alex O’Loughlin) talks to the instructor, who says the “kid” Junior Reigns (Beulah Koale) is too much like McGarrett and isn’t HPD material. He invites him to lunch and tells him to stop calling him “sir”.

McGarrett and Lou Grover (Chi McBride) are looking at buying a used oven, Lou says it’s not a good idea because his partner is out of town and with him going rogue he should expect blowback. McGarrett says he can get this for a quarter of the price; Lou agrees but says he should talk to Danny Williams (Scott Caan). McGarrett says he doesn’t have a problem with him calling but when he calls Danny, McGarrett hangs up the phone.

McGarrett gets a call and it is cut off with several gunshots and they race off. They arrive, saying it wasn’t just a murder, someone wanted him to suffer. Lou and McGarrett leave, thinking someone might have found out he was a CI; as they are driving, Jerry (Jorge Garcia) calls them with the news that someone broke into their system last night and this could explain how the information came out that he was a CI.

Lou and McGarrett go to see Aaron Wright in prison, asking him to help them because he is the one person who was able to breach their system successfully. They bring him to a suite where Tani Rey (Meaghan Rath) is waiting; McGarrett handcuffs him to the table and orders him to get to work.

Lou wants Jerry to keep digging to find anyone who would have a reason to have it in for “Toast”; when Danny learns that Toast is dead, he says he is on his way home. Aaron is able to learn that they found out whoever single confidential informant Five-0 ever worked with and what happened to Toast could happen to any one of them next.

Junior sits at shrimp truck when McGarrett arrives, concerned that Kamekona (Taylor Wily) isn’t around. He tells Junior that it is okay that things are not okay all the time, and when coming home it can be a bit tricky, offering to help him with the process. He will help him but in order to join the Five-0 taskforce, he needs to graduate from the police academy. When he learns Junior doesn’t have a cellphone he says he will drop one off at the academy for him.

Jerry calls and informs McGarrett were Kamekona is and says he is going to get him. Meanwhile, Aaron finds a signature in the code that says “Mogera”; he says the person wasn’t dumb, he was just arrogant. Aaron knows who Mogera is and says he is a legend who is actually blind.

McGarrett arrives to see Kamekona’s shrimp truck on fire. He opens the door and finds someone inside, able to get him out just as the truck explodes. He is able to tell him that 2 men in a black SUV did this and took Kamekona with them. Jerry calls McGarrett, saying the phone is off but he is sending a helicopter to the area; they worry that Kamekona burned a lot of guys through the years.

Lou meets with Harley Taylor (Leonardo Nam) demanding who he sold the list to as they are running out of time. He says he never hit a blind man but that isn’t something he should take a gamble with right now. Meanwhile, Kamekona is repeatedly being beaten but he says they are making a mistake as they have the wrong guy.

They know he works for Five-0, but he denies it saying the cops come by his truck because they like to eat. He says he wants the 500 grand that was stolen from the safe house just before he as snatched up and tells him to think about it before he lies again, saying the money is the only thing keeping him alive. Kamekona says he took the money but it is gone, he spent it. He tells Kamekona he better hope he is lying.

Aaron tells Tani he is working as fast as he can when Tani gets a message from KOA saying they know she is looking for them and they will be home in a couple days. She wants to know when he will be home, Aaron asks about the guy, then she says it’s not about a guy; he says then it has to be her sister or brother. She asks Aaron if he just compared his psycho brother to hers? She knows about Ian who kidnapped Grover’s daughter and kept her in a cage. She tells him to shut his hole and do what he is supposed to do.

Lou calls McGarrett telling him the ballistics match the gun from a crime scene belonging to Marks. He tells McGarrett not to worry, he has a BOLO out on him. Tani appears to be in trouble when Aaron tells her, “It won’t be long now!” and two men burst into the room and shoot her in the chest, he takes the files and when one of the men raises his gun to her head, Aaron orders him not to and they leave.

McGarrett and Lou stand as Tani gets checked over and the scene is processed; they learn from Jerry that a car belonging to Marx just left the scene. Suddenly, McGarrett realizes that Aaron could have stolen the CI list the first time he breached the system as an insurance policy. McGarrett says as it stands they need to find Aaron to save Kamekona and the “blind hacker” is the only one who can help them.

Lou and McGarrett come to see Harley Taylor, saying he either wants the credit for this ninja hack or Aaron Wright has some huge leverage on him. Harley says he is the scapegoat to buy some time, he doesn’t consider himself a criminal but when he accessed government serves, Wright found out about it and threatened to reveal it to authorities. He apologies for his part in this and their friend. McGarrett says he now works for him and wants him to hack in and help them.

Jerry is thrilled to watch Harley work. They are able to find Joey Kang in the system, who has been laying low since he got out of prison. McGarrett orders Jerry to find Joey because it’s urgent to find Kamekona.

Joey comes to see Kamekona again, who repeats that he spent the money and cannot give him what he doesn’t have. Joey says this means he will kill him and calls him stupid for not being scared. Kamekona reveals he was just a lost kid who should have died in prison and ever since he got out, he was trying to live his life right so kids can make it like him. He says he never took a single day for granted and if Joey was going to take anything away from him, he is 8 years too late. Joey orders his henchmen to untie Kamekona as they are going for a ride.

With Kamekona in the back seat, Joey directs his driver where to go. McGarrett and Tani visit Mr. Kang (Donald Li), pouring gasoline all over his garage, telling him that fire is the one thing people are afraid of. He says he will do whatever it takes to protect his family, telling him to get Joey on the phone, giving him 3 seconds as he holds his lighter. Joey wants to know what Kamekona did with the money, and he says he wouldn’t believe him if he told him. Joey’s phone rings.

Mr. Kang nods his head to McGarrett who throws him the lighter. Joey pulls his gun out of his back, cocks the gun but then tells Kamekona that today is his lucky day and leaves with his henchmen.

McGarrett arrives at the Downtown Oahu Mission Center, looks around until he spots Junior in his little cubicle. Junior is shocked to see him there, but he reveals he tracked the phone he gave him. Junior knows the academy has accommodations and says he needs to be able to contact him; Junior admits he lost the phone. McGarrett tells him to pack up his stuff and meet him out front, saying he is staying with him until he graduates.

At Tropics Bar & Grill, Jerry stands up and does a toast to “Toast” where they all have their fond memories of their adventures with him. Kamekona is there with his family, who says they will get sick of him soon as he will get the shrimp truck fixed and they will soon be working for him again.

McGarrett arrives very happy to see Kamekona; he introduces Junior to everyone saying he will be staying with him. He tells Lou they caught Joey Kang at the harbor; he worries about Tani Rey though. He realizes where she is and goes to see her with the dog, Ed.

She appreciates him checking on her and before she can protest, he says he is staying telling her it wasn’t her fault. He says it was his fault for taking Wright out of prison in the first place, it was his mistake and can only learn from it. She admits she was distracted by her brother and if she wasn’t she could have taken on the 3 guys. She questions her ability to do the job, but he says if she wasn’t the one for the job, he wouldn’t be there.

Days later, Kamekona watches the kids play basketball in the gym. Eli, the coach comes to see him, who says everyone pitches up in the upkeep of the place and tells him he is always welcome there. Kamekona walks out smiling as there is a plague on the wall that says the community gym was established in 2010 by an anonymous donor.