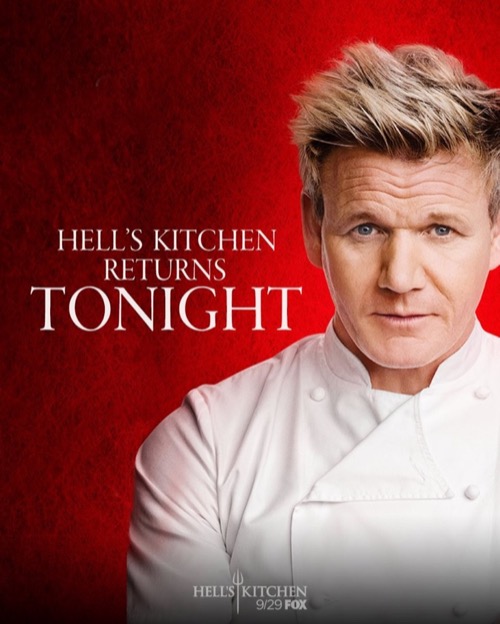 Tonight on FOX their Gordon Ramsay culinary competition series Hell’s Kitchen airs with an all new Friday, September 29, 2017, season 17 episode 1 premiere and we have your Hell’s Kitchen recap below. On tonight’s Hell’s Kitchen season 17 episode 1 episode called, “In the Season 17 premiere, Chef Ramsay invites 16 all-stars back to the kitchen for a second chance to prove they have what it takes. The competition begins with a twist on the infamous Signature Dish Challenge, with the winning team enjoying the ride of their lives at Skyslide in downtown Los Angeles, followed by a dinner with Ramsay and special guest Wolfgang Puck.

Hell’s Kitchen Season 17 PREMIERE begins with Chef Gordon Ramsay calling 16 unforgettable chefs who have been waiting to return to Hell’s Kitchen, for a second chance of winning it all. One of these all-stars will be receiving the biggest prize ever in Hell’s Kitchen.

Chef Gordon Ramsay welcomes his guests to the grand re-opening of Hell’s Kitchen. He informs them that the chefs are people he feels deserve a second chance and for the first time ever the chefs will be All-Stars; he introduces the all female red team and the all male blue team. Chef Ramsay then brings out his sous chefs, for the women’s team, Christina Wilson – winner of Season 10 and his men’s sous chef, James “Jocky’ Petrie. The winner’s award is to become the head chef at the brand new Hell’s Kitchen restaurant in Las Vegas; it is on the strip and comes with a salary of $250,000.

The chefs are called in to make their signature dishes. Manda plans to make mussels Jersey style. Milly wants to make sea bass, 3 ways; but when all the chefs lift up their domes, they are confused to find it is not their ingredients. The reason they didn’t get what they wanted is because this is for All-Stars and he is raising the bar; each of them will have to make a spectacular dish on the fly using the ingredients he provided, and they will be facing off with a member of the opposing team who has the same ingredients, he gives them 45 minutes.

The dishes will be judged on a scale of 1-5, and if they get a 1, he doesn’t know why they are there.

Ashley and Jared both bring up duck breast, everyone is hoping that they will be distracted by each other again and fall apart. Ashley’s dish looks great, the duck is nailed beautifully but she needs to use less sauce, 4/5. Jared nailed the duck but the puree if watery, he gets a 4/5.

Barbie and Ben bring up their chicken dishes and Dana and Robyn are smirking at Barbie, saying that it appeared the whole season she was only good when she had to save herself and they were set on getting rid of her. Ramsay wants to know why, Barbie says its because she can cook and Dana says that’s not why but when called out on what she was saying she says everyone has changed, and everything is different now. Barbie 3/5. Ben gets a 2/5 because he got bland on bland when he make a chicken breast stuffed with rice.

Jennifer and Giovanni are up with the battle of the lamb. We are given a flashback of when Giovanni and Ramsay had argued nose to nose. Giovanni says he is more motivated than ever because he has a child who needs a lot more doctors and medical help for her seizures and moderate autism. When Ramsay says he is sorry to hear that, he says she is great and doing fine, don’t be sorry. Giovanni’s presentation is clumsy 3/5. Jennifer’s lamb is cooked beautifully but the eggplant is under cooked and still crunchy. 3/5.

Battle of the scallops between Michelle and Nick from Season 14. Michelle’s dish tastes beautiful 4/5. Nick has a wedding ring on and when he congratulates him, he asks who the lucky lady is; Nick corrects him saying his husband’s name is Michael. Chef knew as Nick says things have changed from when he ran into a girl he dated in high school. The seasoning is beautiful but he ruined the dish with a big dump of polenta, 3/5.

Manda and Milly dishes are pork. Manda did a Southern pork chop getting 3/5. Milly created a spice rubbed pork chop and the pork is incredible 4/5. The scores sit at RED 17 and BLUE 16.

Battle of the filet is season 10’s Dana, who gets a strong 4/5 against season 12 Josh. Josh gets a 2/5 after we revisit how excited he was to meet Chef Ramsay.

Elise and Van are up with lobster dishes. Chef Ramsay asks him what he has against Maitre D’s, and when he asks where he is at; Chef tells him he has an Italian one and he is not to hit him; he promises to be good. Van is the first 5/5 of the night. The pressure is on a very confident Elise who gets the second 5/5 of the night.

As we head into the final round, the women are leading 26 to 23. It’s Robyn versus Benjamin, it is the battle of the salmon. Chef Ramsay loves the spice and the salmon is beautiful. Benjamin gets 5/5. Robyn is up as the men are leading 28 to 26. Her flavor is important but the skin isn’t crispy as she cooked it aside of the fish because it came off when she placed it in a pan that wasn’t hot enough; it is over salty and he says he will be generous and give her salmon dish 1/5. He says it was disgusting and the men win 28-27!

They are in for the ride of their lives in Downtown LA from the top of the 70-storey skyscraper; after that they will have dinner at Wolfgang Puck restaurant, they go off in their limo as the ladies find out they are in for a truly horrible day; there is a huge mess left outside, they need to break down all the bleachers, put away the red carpet and clean up the nasty confetti. The women are already upset that this loss is on Robyn, she feels like she let down her team and she is the weakest link right now.

Barbie makes fun of Robyn who says her Tiger’s Eye helps her keep grounded and if she has any questions all she has to do is ask and it answers; she mocks that the stone talks to her as Elise says its too bad she didn’t ask it about the salmon. Meanwhile, the men are greeted by Marino, who offers them champagne as they each take their turn on the sky slide.

Gordon Ramsay welcomes the men to WP24 restaurant, as they are enjoying dinner he says there is a special guest he would like to introduce them to as Chef Wolfgang Puck enters the room; they are thrilled to get the opportunity of a life time to spend time with two famous chefs. Ramsay congratulates them on their win and leaves them to enjoy the night.

The alarms go off and Chef Ramsay calls all the Chefs into Hell’s Kitchen. He tells them, every year they turn away 1000’s of guests but this year they are opening a bar menu in order to accommodate more people and this is the first time they are going to be up for an individual challenge, to see who among them is capable of separating themselves; he wants them to think of a spectacular dish for the bar menu; but its big, the chef who creates the best bar menu item will be safe from elimination in tonight’s dinner service….